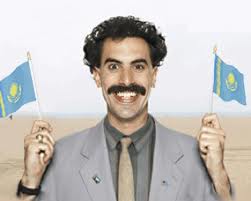 Repeat after me kids: A belt does not a champion make. Need proof? Try the WBA strap at light heavyweight. Besides Danny Green (who won the belt in 2007 then moved up to cruiserweight without ever making a title defense), there has not been a “champion” since Roy Jones got elevated to super champ from the regular variety in 2001. There have been beltholders, sure; the title has not simply sat vacant. But at no point in the past decade has the WBA light heavyweight champion of the world been a serious player in the 175-pound division.

Which brings us to Beibut Shumenov (11-1, 7 KO), who collects shiny accessories like a teenage trophy wife given her middle-aged husband’s credit card. In only his fourth pro fight, and to that point in his career having not yet fought a fighter with a winning record, Shumenov fought journeyman Donnell Wiggins (24-10-4 at the time of the contest) in Shumenov’s native Kazakhstan with something called the “WBC Asian Boxing Council” and “Interim PABA” belts (the latter of which sounds like something a baseball player would get suspended 50 games for having in his system.) Wiggins, who had not won a fight in his previous seven tries, found himself knocked out in two rounds, a mismatch that made Shumenov’s promotional team (a motley bunch full of guys who look like an in-character Sacha Baron Cohen as Borat) start crowing about their “champion”.

Three fights against fringe guys (way-past-their-prime Montell Griffin and Byron Mitchell, plus B-level fighter Epifanio Mendoza) later and someone at the WBA got the bright idea to let Shumenov have a title shot—again in Kazakhstan—against Spaniard Gabriel Campillo, who himself had (and still has) never beaten anyone notable. I hope for Steve Smoger’s sake that they put him up in a nice hotel and gave him the Genghis Khan nickel tour of the Central Asian steppes, because to be away from his family to referee a “title fight” like this one was a waste of his talents. Campillo won a majority decision (113-113, 114-113, 115-111) and retained the belt; Shumenov, unable to win even a home-cooking decision against a guy who’d flown 3500 miles, should have been relegated to the “go get a few fights” pile.

Of course, that was not the case; Shumenov’s people howled for a rematch, saying that a close majority decision was sufficient grounds to mandate a rematch. Twelve rounds in Vegas later (and with a preposterous 117-111 card from Patricia Morse Jarman, who judged the fight the way Bilo Sagdiyev from the Borat movie might have, bought and paid for), Beibut Shumenov was the light heavyweight champion of the world, on top of the division, a god among m…oh. Right. He had the WBA strap. Jean Pascal was the consensus champ (and would win the Ring Magazine honor later in 2010 to cement his position.)

Shumenov’s first title defense was against Viacheslav Uzelkov, a contest on Friday Night Fights for a “world title” (if you don’t think too highly of the term). Uzelkov took a 22-0 record into the fight and could fairly be said to be Shumenov’s first test as a pro (that’s right—the “first test” came when he was already “world champion”. You can have five minutes to recover from that nut punch Shumenov’s promotional team just gave you.) I remember that fight well—I had to watch it on replay on ESPN3.com the morning after it first aired because I fell asleep during the late rounds. Uzelkov dropped the Kazakh in the first round, Shumenov dropped Uzelkov in the third…and then nothing else happened for the next nine rounds. As if by default, Shumenov cruised to a wide unanimous decision victory on scores of 117-109 and 118-108 (twice).

As cherry on this that-ain’t-chocolate sundae, the “high five, sexy time” of this Cultural Learnings of America, Shumenov went…back to Kazakhstan? Really?! Against William Joppy, whose main claim to fame is that he loses to great fighters (he’s Edison Miranda with better PR)? Oh well…it’s your money, Beibut. You want to give three percent of it to the WBA, they’ll gladly take it. Sixth-round KO, not that it matters.

Shumenov’s next fight is against Danny Santiago, who has been knocked out four times and whose only signature win was against then-heralded prospect Elvir Muriqi…in 2004. This should be another win for Borat…er, Beibut.

So who should Shumenov fight? Well, besides Tavoris Cloud, Bernard Hopkins, and Nathan Cleverly, collectively known as “the other three champs at 175”? How about Ismayl Sillakh, Zsolt Erdei, or even Maxim Vlasov? Never mind Chad Dawson or Jean Pascal or even getting Glen Johnson to move back up from 168. I don’t think Shumenov could beat any of the guys I just named—the latter three are too skilled and experienced, Sillakh and Erdei are legitimate challengers to the real titleholders, and even Vlasov would probably knock Shumenov (whose chin has already been tested by a mediocre-power opponent) out. And this guy calls himself a champion. Sure…if having a belt around your waist makes you a champ, he’s the champ. Let me go sit in a sauna, sweat off seven pounds, and step on a scale, then I’ll drag the homeless guy out of the gutter near my house, put boxing gloves on him, beat him senseless, and call myself the SRHBA (South Reno Hobo Boxing Association) light heavyweight champion of the world. Actually, he looks a little scrawny. I’ll have to put buckshot in his trunks to get him to the limit.

Remember the moral of the story. A belt does not a champion make. Until Shumenov beats a top-five guy at light heavyweight, he’s no champ.

Fox Doucette covers Friday Night Fights for The Boxing Tribune. His column, The Southpaw, appears on Thursdays. Fan mail, hate mail, and a venue and purse bid for that fight against the homeless guy can be sent to beatcap@gmail.com.