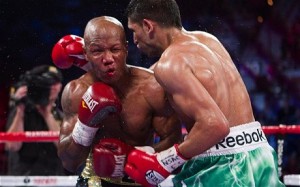 July could have very well marked the end of the line for three colorful characters in boxing as Zab Judah, David Haye, and Kermit Cintron all met with career-defining losses in main stage bouts. All in their 30’s and in tough divisions, what options are left for these headline-making, former world champions?

Haye, the youngest of the bunch, just three months shy of his 31st birthday, has suffered the greatest career damage. After three years of stalking Wladimir Klitschko and aggressively taunting the heavyweight champ and brother, Vitali, Haye turned in a tepid, timid performance when he actually got his wish on July 2nd at the Imtech Arena in Hamburg, Germany. Worst of all, Haye turned himself into a laughing stock when he blamed the poor showing on a broken pinky toe that he suffered a few weeks prior.

The London native swears that he wants a rematch with the now WBA/IBF/WBO champ, but few believe him and even fewer would care to see a another round of mega hype and mini output. With Vitai Klitschko holding the WBC strap, that leaves Haye with literally nowhere to go if he wants to once again claim a piece of the heavyweight pie. He could probably make a decent chunk of change against Chris Arreola in an American debut bout and might get some takers if he went the regional route and challenged Tyson Fury in an all-UK showdown. Other than that, options are slim for Haye and he will likely have to make due with the 8-figure pay day he got for his one-sided loss to Klitschko.

Kermit Cintron seemed to be en route to a rebirth of sorts when he got cut down by the crude, but hungry Carlos Molina on the Brandon Rios-Urbano Antillon undercard on July 9. He had just signed with Top Rank and rumors had him in consideration for the Holy Grail of money fights against Manny Pacquiao. All he had to do was beat a few tune-ups and get his name back in the headlines. However, as has usually been the case over the course of Cintron’s career, he got outworked by someone who simply wanted the win more than him.

At 31, Cintron still has plenty of time to rehab his name and rebuild his career, but one might wonder if there really is a point in doing so. Cintron hasn’t won a fight since stopping Julian Ramos in October of 2009 and hasn’t fought with any urgency since beating Alfredo Angulo 5 months prior to that. Inactivity and promotional issues put him on the shelf for 14 months after the odd 2010 technical decision loss to Paul Williams (which saw Cintron injure himself after a fall from the ring). He has the talent to do well in a fairly open jr. middleweight class, but inconsistency and lack of focus plagues him. He’s scheduled to meet Antwone Smith in an August 12 ESPN Friday Night Fights date that could be problematic in terms of style. If Cintron wins, though, expect him to be fast-tracked to a title bout with Austin Trout or Miguel Cotto (should Cotto beat Antonio Margarito in December). Any pipe dreams of facing Pacquiao should be shelved for the time being. Not even Manny’s most loyal fans would be excited about a Pacquiao-Cintron pay per view show.

As for Zab Judah– The Brooklyn native seems to be repackaged and resold to the public every few years with the promise of a “new” Judah who was rededicated and ready to finally achieve his full potential. His most recent loss to Amir Khan on July 23, though, may be the end of the line. In recent losing efforts, Judah has been competitive and entertaining up against the likes of Miguel Cotto, Floyd Mayweather, and Joshua Clottey. However, a passive 4 and a half rounds against Khan before being taken out by a belt-line gut shot in the fifth did not leave the fans wanting more.

Worst of all, the 33-year-old southpaw is competing in a very deep jr. welterweight division with not much room left for slackers or underachieving former titlists. Talent has never been an issue with Judah, but without focus and drive, he will find it harder and harder to handle the top fighters as he ages. Another belt might fall in his lap and another repackaging could be in store, only with a lot less fanfare and a much smaller paycheck. But expect the same result as we’ve seen at least five other times when promised a “new” Zab Judah.

Boxing is a strange sport where contacts are just as important as actual achievements, so weirder things have happened than for three talented, but vexing fighters to once again find their names among the elite. The question is whether fans will be there to give them yet another “last chance.”