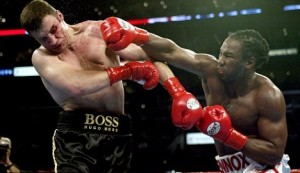 In the first of a series, the sport’s top stars are compared to their peers from just ten years earlier in a division by division showdown. As a basis of comparison and to determine the match-ups, the Ring Magazine annual rankings from 2001 were compared with their current top 10 fighters.

In 2001, Lewis was at the top of his game and Ring Magazine champion. He had just crushed Hasim Rahman in the rematch of his second career loss and, more importantly, with the help of Emanuel Steward he had become comfortable in his own skin as a fighter. The current day Klitschko, also under the guidance of Steward and also Ring Magazine champ, has matured and fine-tuned his style to the point of being pretty much untouchable among the current crop of big men. The winner of this battle between Emanuel Steward-trained giants would come down to chin and grit. Both fighters have suffered hard KO losses, but only Lewis had really shown an ability to comeback from them.