Paul “Dudey” McCloskey (22-1, 12 KOs) and Breidis “Khanqueror” Prescott (24-2, 19 KOs) will meet at the Odyssey Arena in Belfast, Ireland on Saturday September 10 in a WBA jr. welterweight title eliminator bout, with a possible second shot at WBA/IBF champion Amir Khan on the line. 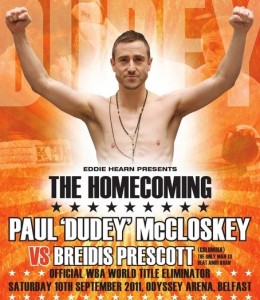 Ireland was never able to land any effective punches consistently, but his awkward movement had Khan swinging at air often enough to keep him from getting in a rhythm. A cut over the left eye caused by an accidental clash of heads forced the early stoppage of the fight and Khan won a six-round technical decision shutout. Prior to his fight with Khan, McCloskey had not fought an opponent of note while outclassing opponents on the European circuit.

Prescott made a name for himself with an upset knockout over Amir Khan in 2008. Since his one-round shellacking of the former Olympic Silver Medalist, Prescott has failed to capitalize on the victory. 2009 proved to be a year of major setbacks for the lanky Colombian. He dropped back-to-back decisions to Miguel Vazquez and Kevin Mitchell before moving up to the jr. welterweight division and winning three straight to set up Saturday’s fight with McCloskey.