David Haye. Evander Holyfield. Tomas Adamek. What do those three guys have in common? The answer is that all were great champions at cruiserweight before making a real name for themselves in the heavyweight division, almost like big-league baseball players who hit forty homers in Triple-A 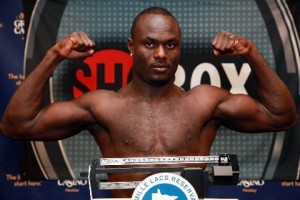 before getting a September call-up and ending up off to the races. Watch Lateef Kayode on ShoBox tomorrow night and you can say to yourself later that “I saw him when he was in Triple-A” after the Klitschko brothers retire and the heavyweight division is once again a wide-open title chase.

Kayode (17-0, 14 KOs) has a great name (at risk of sounding corny, “you can’t spell Kayode without the kayo”) and power to match. He’s beaten five straight guys for some flavor of minor belt in the alphabet soup organizations and will very likely add a sixth such scalp to his resumé tomorrow night in Minnesota against Felix Cora Jr. (22-5-2, 13 KOs), who has already been knocked out three times in his career against guys who were at the same stage in their careers as Kayode is in his. The Nigerian is ranked in the top five by all four major alphabet soup organizations (WBA #1, WBO #3, WBC #4, and IBF #5) and, although Ring Magazine has him outside the top ten, he would have to be the favorite against anyone at #5 (Troy Ross) or below on the Ring’s list.

Still, it’s cruiserweight. The 200-pound division has, over the course of its nearly thirty-year history, had very few pure cruiser champions. Punch the name of any top cruiser into Boxrec and you get guys who either stopped over at 200 on their way to bigger and better things or made their name at light heavyweight and went north as they got older and couldn’t make 175 anymore. Cruiserweight is not a glory division, and its reputation is tarnished by its seemingly artificial placement between two of the classic “old school eight” divisions.

Quick, name the top five cruiserweights in the Ring Rankings (and I spotted you Troy Ross). Unless you really follow the sport closely, you missed one or more of Steve Cunningham, Marco Huck, Krzysztof Wlodarczyk, and Denis Lebedev. If I told you Antonio Tarver was #6, your response would probably be either “wait, he’s still fighting?” or “isn’t he a light heavyweight?” You might know Lebedev because he beat the stuffing out of the Weekend at Bernie’s version of Roy Jones a few months ago. You might even know Danny Green at #10 for a similar danse macabre in 2009. But by and large, if there’s a division in boxing (north of 130 pounds) with a bigger image problem, I invite you to point it out to me.

This is where Lateef Kayode will make his name. He will destroy Cora tomorrow night on a late-night television slot where his chief competition will be your late local news, David Letterman, and Skinemax flicks. From there he is slated to be the mandatory challenger for Guillermo Jones’ WBA cruiserweight strap and could work his way into a title fight with any of the top three guys from the previous paragraph (the IBF, WBO, and WBC champs, respectively.) Beat more than one and he’ll start building a case as one of the great cruiserweights in the short history of the division—a far cry from, say, Holyfield or O’Neil Bell or Carlos DeLeon, but certainly on the same level as a Haye or Adamek.

All this is by way of saying that if the Nigerian wants to truly make a case for Canastota, he’s not going to do it by staying under 200 pounds unless he really wants to drop weight and campaign against the Bernard Hopkins and Jean Pascals of the world. Great fighters do not settle at the ultimate tweener weight, a division created purely to find a place for fighters who otherwise would be too big for light heavy and too small for heavyweight but not respected as either. Kayode needs to finish his business at cruiser, treat the division as the Triple-A baseball of boxing, then get himself a fight with the first guy to capture one of the vacant belts once Wladimir Klitschko finally retires. Lateef is only 28; the belts will be there when he’s ready to go after them, and if they’re not, well, that’s just a casus belli to do what David Haye couldn’t, namely move up to heavyweight, call out a Klitschko brother, and get in there and make some history.

Then again, maybe all the cruiserweight division needs is a guy to stick around and make exciting action fights to legitimize the division for the first time in at least 23 years (since Holyfield became the first and so far the only “undisputed” champ, unifying all of what were then three major alphabet belts). He could beat Jones and Cunningham and Huck and Wlodarczyk and Lebedev and a partridge in a pear tree. There has never been a pure cruiserweight inducted into the International Boxing Hall of Fame (Qawi was recognized for his achievements at 175 and Holyfield will surely go in as one of the all-time great heavyweights). Then again, there has never been a Major League Baseball player inducted into their Hall of Fame for his achievements in Triple-A ball either. Either way, you the fan should be watching Lateef Kayode fight. He’s fun to watch, puts on a great show, and you might just be watching that minor leaguer hitting the long, tall home runs on his way to the big club.