As I mentioned in my Star Power PPV recap Saturday night, the HBO lynch mob routine is getting real old. 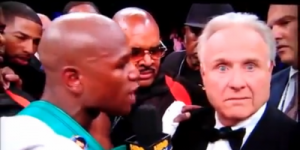 devil” routine and stop pushing it on each and every telecast? I guess it’s reassuring that the HBO crew feels independent enough to constantly crotch-kick the guy on his own shows, but it would be a lot more reassuring if Mayweather wasn’t the only fighter they treated like pond scum. Not even Antonio Margarito, boxing’s most vile real villain, catches as much flack as “Money.”

As headliner and co-promoter, Mayweather is basically generating the paychecks for Larry Merchant, a guy almost gleefully eager to wedge his own dislike and disdain into the last few moments of any Mayweather show. As such, I can’t blame the guy for being somewhat peeved about being confronted at every opportunity, especially when others are most definitely not treated with the same blatant and aggressive disdain. If this were an actual lynch mob, they’d be having Mayweather buy the rope and give the yokels a ride to the hangin’ tree in one of his Escalades.

Fierce and sometimes brutal criticism should be part of the game for the media, but it has to be dealt evenly across the board, not just dumped onto the head of one particular target over and over again.

It looked as though Mayweather wanted to put on a good show Saturday, it’s just that circumstances got in the way– The circumstances being a flagrant Ortiz headbutt, an inept Joe Cortez, and Mayweather’s own poor decision making. At Star Power, Mayweather looked more like the thug “assaulting” security guards with his index finger than the genius who tamed Diego Corrales years ago.

Even if he doesn’t realize it, Ortiz wanted a way out. He found the wrong end of the “out” amidst a web of confusion culminating in a Mayweather left-right combo. Forget the “Aw shucks” attitude and warm smile, Ortiz acted like a real disgrace when he made the conscious effort to foul his opponent. In recent times, few headbutts have been as flagrant and few intents as clear. Ortiz was cheating to win…Period. And it’s too bad because he was actually doing fairly well until the frightened child overtook the trained prize fighter in his own mixed-up mind.

It’s almost a cliche at this point, but Hall of Fame ref, Joe Cortez, once again screwed up a major fight by being FAIRly inept and about as FIRM as a limp dish rag. While Ortiz was trying to snuggle with Mayweather and Mayweather was looking to knock the Chiclet teeth from Ortiz’s mouth, Cortez was looking at ringside officials, trying to understand and absorb the decision he had just made. Joe Cortez is a fine referee…until the script flips even to the slightest degree. Once that happens, you can count on chaos.

Alvarez did what he was supposed to do– knock the stuffing out of Alfonso Gomez. But the red-headed Mexican looked very average for most of the five rounds before the sixth round stoppage. Especially troubling was the “Andre Berto” stiff, lifeless legs he was sporting for much of the fight. A real contender would’ve knocked Alvarez out last night. But he was fighting a CONTENDER cast member, so he got away with an otherwise sloppy performance.

Morales looked about as good as a well-worn featherweight at junior welterweight can be expected to look. The 21-year-old Pablo Cesar Cano showed promise at times and can definitely be filed away as a “work in progress,” but it was clear that the kid lacked the goods to be in the ring with someone as smart and as experienced as “El Terrible.” As for Morales, it sure looks as though his performance against Maidana had more to do with Maidana’s atrocious fundamentals and poor game plan than any sort of resurgence for the fighter from Tijuana. Oh yeah…and world title bout? Nope. Won’t even mention that bogus designation.

This was Vargas’ first real test against a live body in Josesito Lopez and he just barely did enough to win. Along the way, he proved himself to be just another 20-something fighter who, when presented with a real fighter as an opponent, will fall into the pitty-pat scoring plan, just touching his foe enough to win rounds on pure activity. Another wonderful legacy of our current amateur boxing system.