Faded former champions being auctioned off as easy resume-padders to the highest bidder is nothing new in boxing. As a matter of fact, there’s almost as big a market for big name/low risk opponents as there 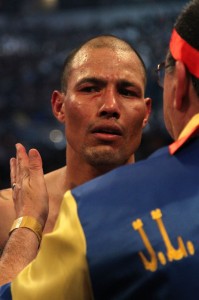 is for high-end prospects.

So, it should come as no surprise that the fatally faded 37-year-old Jose Luis Castillo has gotten the green light to fight for the WBC’s NABF welterweight title against Canada’s Antonin Decarie at the Bell Centre in Montreal, Quebec on October 20.

Castillo, who hasn’t won a meaningful fight since scoring a razor-thin split decision over junior welterweight, Herman Ngoudjo in January of 2007, has been beaten (and beaten up) decisively by every decent opponent he has faced in the last five years. Most recently, the former lightweight champ dropped a unanimous twelve round decision to the pedestrian Jorge Paez Jr. in a March bout for yet another WBC fringe title.

Prior to that, in March of 2010, the WBC gave the thumbs up to Castillo vs. Alfonso Gomez for their Continental Americas welterweight title– a bout which proved to be a mismatch and ended with Castillo retiring in his corner after the fifth round.

Apparently, Castillo’s losing ways and occasional wins over the likes of the 4-12-2, Daniel Eduardo Yocupicio, qualify the veteran fighter for title shot after title shot. Or, maybe, as WBC President for Life, Jose Sulaiman likes to say, the organization is somehow looking to “promote the Mexican boxing scene” by sponsoring beating after beating for the once-great lightweight champion.

Make no mistake about it, though, Jose Luis Castillo is risking his life for pennies on the dollar…and the WBC has no problem with it– as long as they get their cut.