I’ve been called a lot of things– from bald fuck-head to cannibal necrophiliac– but one thing you can’t call me is inconsistent. All of my criticisms and attacks on the boxing world as a freelance professional bomb-throwing iconoclast come down to one central theme– Boxing’s slow suicide and the greed, arrogance, and stupidity that are bringing it about.

If the art of two men beating each other up is ever going to regain any sort of prominence or find a mainstream audience, it needs to start being more NFL and less WWE. It needs have some sort of structure and narrative or, at the very least, pretend to walk the walk of a real sport.

This means everything from a real rankings system, to a real media, to a real and consistent way of handling the in-ring goings on. 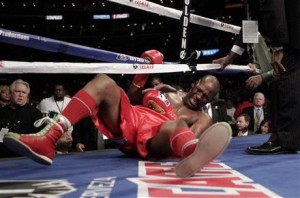 and took Bernard Hopkins to the canvas, winning the WBC light heavyweight title in the process.

Forget whether Hopkins was faking or whether he could really have continued or not. The fight ended on a foul. It was a foul committed by Dawson. Period. A ref’s job is to rule on what actually happens in the ring, not to read minds or gamble based on what might’ve been on the mind of those involved. NFL officials don’t care if someone meant to hold or not–they just rule on whether holding took place.

This should have been an easy call for referee Pat Russell– as easy as if Rafael Nadal had beaten Novak Djokovic unconscious with a spectator’s chair before the Wimbledon Tennis Final. But in boxing, Nadal would likely get the trophy by default and be allowed to keep it until the next tournament, while promoters re-write history with the help of a dim-witted and eager to please media.

Hopkins-Dawson sure looks like the type of decision born to be overturned by the California State Athletic Commission (CSAC), but the damage has already been done. The fans in attendance and those paying upwards of 60 bucks to see the fight on pay-per-view were screwed out of a proper ending. And, perhaps more importantly, the mainstream sports world saw boxing’s second straight major event shit on itself due to the deadly mix of incompetent officiating and main event fighters with no impulse control.

Just a month ago, Floyd Mayweather and Victor Ortiz ended their big ticket pay-per-view on a similarly sour note when Ortiz headbutted Mayweather and Mayweather sucker punched Ortiz while referee Joe Cortez remembered the pretty flowers at his table during his Hall of Fame induction a few months earlier.

Saturday’s light heavyweight title fight, at best, wouldn’t have likely set the world abuzz or brought in any new fans. But in its worst case scenario, it drove away some much-needed fans. This stupidity could have been the last straw for some of the real hardcore fans (and anyone who bought this show had to be as hardcore as they come) who have patiently supported the sport through some real frustrating times.

So, what can we do? Normally, fans would have a strong media and a sympathetic, logical commission to handle such issues. But, as we all know, boxing doesn’t have any of that.

Count on a wave of articles filled with indignation to pop up in the next couple of days and, since media attention is like kryptonite to government-appointed drones with cushy commission gigs, the decision will likely be overturned. The boxing media loves to flex its muscles on these easy lay-ups, but won’t ever apply their same powers to some of the sport’s more pressing issues– like the reason these things keep happening.

Hell, some of these guys were questioning why Hopkins-Dawson was even signed in the first place. Take this quote from Max Boxing’s Steve Kim in his preview to Hopkins-Dawson:

Hopkins-Dawson is one of the hook-ups that some will deem as “important” for whatever reason. Maybe because it features two of the highest ranked 175-pounders in the world but as discounted seats are being offered to VIPs at the Staples Center, you have to ask yourself, like a Sergio Martinez, if so few people want to see a fight or fighter, just how “important” could it really be?

Doesn’t sound much like a sympathetic ear when it comes to a push for boxing legitimacy, does it? Honestly, it doesn’t sound like someone who even likes the sport all the much. If one of boxing’s biggest writers is clueless and/or ambivalent as to why the division’s top two fighters should actually meet one another in the ring, really, where are we going with this?

Don’t expect boxing to exist and thrive as just a series of fights with no real back story or logic behind the match-ups. Quality matchmaking is a key factor in any sort of boxing resurgence and it would definitely appeal to the hardcore fans, energizing its base, but that would be preaching to the choir. The outside world has to know what’s going on and feel the urgency or curiosity to seek out specific fights. This means, of course, that the best have to fight the best, but before that, someone has to establish who the best are. It also means that fans would have to feel safe in knowing that they won’t be screwed if they decide to tune in and invest their time in boxing’s product.

Maybe 30, 40 years ago boxing could get by just fine as a series of random knock-down, drag-outs with the occasional controversy thrown in. But this was when boxing had a larger fan base and a steady stream of new eyeballs via free TV coverage and mainstream media attention. Nowadays, boxing is toxic to network TV and is more and more a niche sport with most of its biggest bouts confined to premium cable outlets and pay-per-view. So, with access harder and harder to come by, the sport needs to make it easier for new fans to just jump in and get the bug– And this is accomplished by structuring itself to follow a logic and order similar to an actual sport.

We’re not talking about a major revolution or upheaval– Just a coherent rankings system and a consistent set of rules. In other words, just a token effort to be even the slightest bit user friendly. But, of course, these changes would make it harder for the douche bags at the top of the boxing food chain to keep plundering the sport. So, forget it.

And the media? This should be right where a responsible and strong media presence steps up and gets things done…right?

Well, for the most part, the boxing media is subsidized by the same creeps who would be most resistant to any of these changes and any sort of move towards legitimacy. It really makes you wonder about those boxing media types who routinely poo-poo the idea of fair rankings and laugh at the mention of reform. Most of these guys are fans and followers of other sports, so it’s hard to understand why they happily overlook the kind of chaos in boxing that they wouldn’t tolerate in any of their other favorite sports.

But getting back to Hopkins-Dawson.

Dawson fouled. Dawson was declared the winner. Hopkins pouted in the post-fight interview. Fans walked away in disgust.

It was business as usual in the self-defeating world of big-time professional boxing.

You can email Paul at paulmagno@theboxingtribune.com or catch him as he secretly papers the cyber world in search of acceptance and higher paying gigs. Paul is a full member of the Burger King Kids’ Club and an ordained minister in the Universal Life Church.