Boxing fans love knockouts.  Seeing some poor sucker get laid out appeals to the brutal elements of our nature, and those of us who have dedicated much of our lives to following the noble art have long since gotten over feeling bad about the fact that we get off on watching a man beat down.  Indeed as great 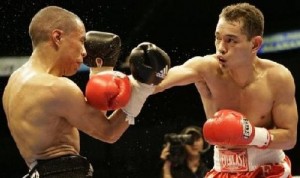 American author Jack London put it, “It is the ape and the tiger in us, but it is in us.”  This love of violence that we all share as fight fans will likely cause many viewers to applaud Saturday night when Nonito Donaire obliterates Omar Narvaez on HBO.  This time, however, this writer will not be one of the happy masses.

First things first though, Narvaez (35-0-2, 19 KOs) is no scrub.  Despite being a natural flyweight, he is a skilled fighter, undefeated, and would likely give the average bantamweight belt-holder trouble.  Nonito Donaire (26-1-0, 18 KOs) however, is light years beyond your average bantamweight champion.  His main advantage comes from a freakish ability to make a weight that seems unnatural considering his frame.  Donaire is so much stronger than his opponents at 118 pounds that even the great Fernando Montiel, thought by many to be the best bantamweight in the world before Donaire literally dented his skull earlier in the year, didn’t have a prayer.

When trying to find some historical comparison to Donaire in terms of a physical freak, soon to be Hall of Famer Tommy Hearns comes to mind.  While it remains to be seen if Donaire can go up in weight and continue to fight at an elite level like Hearns did, Donaire from 112-118 has been similar to Hearns at 147.  They both combined a great skill set with a freakish amount of size and strength relative to other fighters at their weight.

So as fun of Donaire’s demolitions of guys like Vic Darchinyan and Montiel have been, count me among the few that are getting sick of it.  I know going into any Donaire fight at 118 pounds that he can basically knock his opponent out whenever he feels like it, and it robs the bout of any potential drama.

Narvaez, at 5 feet 3 inches, is even smaller than most of the guys Donaire has fought.  Despite his credentials and undefeated record, it will be downright shocking if he goes the distance, and an epic upset if he actually manages to win.  A good recent comparison might be middleweight champion Sergio Martinez’s fight with undefeated contender Serhiy Dzinziruk.  Dzinziruk was an undefeated but mostly unknown fighter who was respected by hardcore fans, similar to Narvaez.  However when put in the ring with the bigger, vastly more athletic Martinez, he was completely out of his depth.  I fully expect Narvaez to find himself in the same situation against Donaire.

So what am I asking of Donaire?  Well assuming that it is a bit much to demand that he cancel this fight and immediately move up to 126 to fight Yuriorkis Gamboa, let’s see him take care of his business and then move up to 122 as he currently is planning to do. Discussed opponent Toshiaki Nishioka may still not be enough to handle Donaire’s raw physicality, but at 5’6’’ he will at least not be a complete size mismatch.

Donaire’s true greatness might not be tested until he finds himself in the featherweight division, or perhaps even higher on the scales, against a guy like Gamboa, and I for one will not be fully sold on him as a top pound for pound fighter until he picks on somebody his own size.