If at first you don’t succeed, try, try again. That ought to be the motto of Aussie 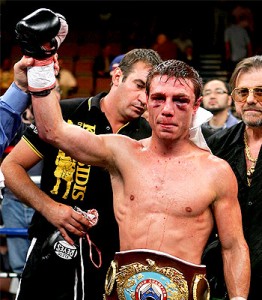 lightweight Michael Katsidis (28-4, 23 KOs) as he makes his third attempt to recapture the WBO crown at 135. Katsidis takes on Scotsman Ricky Burns (32-2, 9 KOs) at Wembley Arena in London, who is moving up from junior lightweight where he holds the WBO’s version of that belt.

Katsidis has held a world title at lightweight before; in total he is 4-3 (1 KO, along with 2 KO losses) when fighting for the very title that is on the line in Saturday’s fight. He first won the title from Graham Earl and defended it against Czar Amonsot in 2008, and his other two scalps have been Vicente Escobedo and Kevin Mitchell. Therein lies the problem; his four wins for the WBO crown were against arguably inferior title contenders, but his three losses are a murderer’s row, namely Joel Casamayor, Juan Manuel Marquez, and Robert Guerrero. Mitchell, undefeated coming into his fight with Katsidis, is the Aussie’s greatest triumph in his career.

This presents a litmus test for Burns. Is he an elite fighter, and therefore likely to defeat Katsidis even as he moves up in weight while already possessing very limited knockout power? Or will he be the next of the Aussie’s victims? Burns has been a respected champion at 130 and carries a 17-fight winning streak into the bout Saturday. However, all save four of those 17 wins (the four fights for the WBO title) have been against truly dreadful competition, including wins against Ernie Smith (13-117-5 coming into his fight with Burns), Billy Smith (11-58-1 and 12-63-1 in their two fights), and Gheorghe Ghiompirica (8-37), none of whom Burns knocked out. The only people to stop Katsidis have been Marquez and Casamayor, and Ricky Burns doesn’t punch like either of those guys. The lack of power may not be enough to keep Katsidis off him, which could lead to Katsidis simply walking through this fight in short order.

The fights air on Sky Sports 456 in the UK on Saturday night; check your local listings for times and channels outside of the UK.