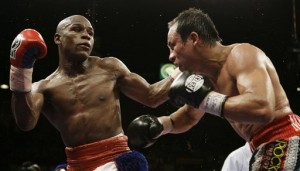 Last night, via Twitter, Mayweather issued this statement to his followers:

“My condolences go out to the family of the late great Joe Frazier,” Mayweather said via Twitter. “#TheMoneyTeam will pay for his Funeral services.”

Earlier in the year, Mayweather covered funeral costs for former opponent and the source of his first world title, Genaro Hernandez.