On September 9th of this year, the two fighters gave it their all as they slugged it out in the ring for a twelve round draw.  The scores were 115-113 Rivera, 115-114 Pitalua and 114-114 for the draw.  This Friday, both boxers will again go to war in hopes of claiming the vacant WBC Latino Junior Welterweight belt.

Pitalua is 41-year-old Colombian fighter who is best known for his TKO loss to the late Edwin Valero in 2009.  Aside from his bout with Rivera, he’s won five of his last six fights, with all wins coming by KO or TKO.

Having a six year age advantage, Rivera has also faced a higher level of opposition in his career.  Since 2005, he’s faced Zab Judah, Andre Berto and Alfredo Angulo, losing to all three.

This will be the third fight between the two fighters.  In 1999 Pitalua took an UD in a ten round bout 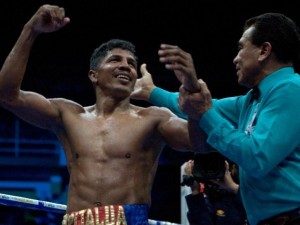 over Rivera.  The fight will be aired on Telemundo.