Bummed out that the Manny Pacquiao versus Floyd Mayweather mega fight seems destined for failure?  Take 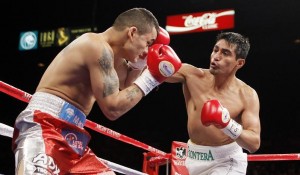 solace, friends.  Here are five fights that could and should be made regardless of what the top two fighters in the sport plan to do.

If I had the power to make one fight on this list actually happen, it would be this one.  Inexplicably, despite both being part one of the best diminutive fighter eras of all-time, these two proud Mexican legends have never faced each other inside the ring.  It really is a shame.  Marquez vs. Morales is all that’s left undone from the Barrera-Pacquiao-Marquez-Morales round robin of excellence.  There was talk of the fight being on the table before Marquez secured his latest encounter with Manny Pacquiao.  Let’s hope its back to being considered, because if either of these fighters retire without facing each other, they will be cheating the boxing public.

Note to promoters: if there are two young, exciting prospects at or near the same weight who have taken it as far as they can go without really fighting anyone risky yet, you may as well throw them in the ring together to see what you get.  Who knows?  Worst case scenario is that one of them isn’t quite what fight fans had hoped for, but that would have been figured out anyways.  Might as well take advantage of the excellent marketing opportunity and big fight theatrics only a fight between two young up-and-comers could provide.  Matchmakers missed the boat on Yuriokas Gamboa vs. Juan Manuel Lopez.  Let’s hope they don’t let that happen again with Alvarez and Chavez, Jr.

This one would be absolutely fascinating.  Bradley fights like he’s wearing bricks for gloves despite the fact he possesses something more similar to pillows.  What he lacks in punch, he makes up for by fighting lean, mean and hungry.  Meanwhile, Maidana has the kind of power in both hands that Bradley can only dream about, and lets his punches go enough to get hit back early and often.  This fight could go a long way to helping Bradley ward off all the hate he received for his perceived ducking of the Amir Khan fight.  For Maidana, it’d be another chance to showcase why he is one of the most exciting fighters in the sport.

Khan wants to move up from junior welterweight to take on the best at welter – whether that’s Floyd Mayweather or Manny Pacquiao remains to be seen.  Team Khan is targeting one of those fights for next year but will need to make a splash in the division first against a marketable opponent. Ortiz fits the bill perfectly.  He’s a fan friendly, talented fighter who has been in with the very best.  With a win in this fight, Khan could prove he belongs in the upper echelon of the division, while Ortiz could use it to show he’s still an up-and-coming force to be reckoned with for years to come.

Okay, so maybe I’m just being too much of an Andy Lee fan here, but hear me out. Martinez is in need of a middleweight opponent that can challenge him, and I believe Lee fits the bill. Martinez had trouble against the classical style of Darren Barker in his last fight, and Lee brings both that and a bit more pedigree to the bout.  Face it, there aren’t a whole lot of fights out there for Martinez at middleweight that will bring big money, but if he refuses to move up to 168, then the next best thing would be for him to clean out the division.  If he’s to stay among the pound-for-pound elite, he’ll have to be capable of looking good against excellent boxers like Andy Lee.  Conversely, a win for Lee would catapult his career to new heights and reinvigorate one of the sport’s most historically popular divisions.