Story and photo by Gary Purfield

Garrett Wilson retained his USBA Cruiserweight belt but did it the hard way.  Down on the cards in a fight he could have won more comfortably being more active Wilson had to produce high drama to pull out the win. 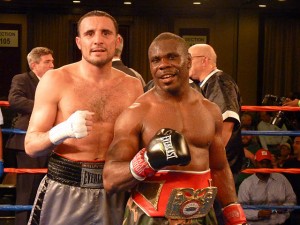 Headlining the Peltz Boxing card from Bally’s casino in Atlantic City Wilson and challenger Chuck Mussachio put on a back and forth fight for the packed ballroom crowd.  Overall fans got their money’s worth tonight.  Plenty of boxing cards disappoint but tonight in AC each fight brought excitement and/or drama to make it full card of boxing action.

Both men in the main event came in with their own backstory motivating them to perform.  Wilson started his boxing career taking on anyone and everyone to earn a payday despite limited experience.  Over the last year he has blossomed as a fighter becoming more disciplined making himself into a contender by gaining the USBA belt and entering the rankings.  Mussachio was battling personal tragedies and recently losing his job as a teacher due to budget cuts.  Each man had reasons to want and need to win this fight.

Wilson controlled the first round landing some hard body shots that had Mussachio wondering why he had moved up to cruiserweight.  He admitted after the fight that he went to his corner after round one stating Wilson’s punches were hurting him.  Garrett continued to be the aggressor in a close second round but Chuck seemed to start to remember his long reach and boxing skills enough to get into the fight.

In round three the see saw battle began as Mussachio began establishing himself.  He had weathered Wilson’s early onslaught and settled in to his typical hit and move style.  Mussachio began to get comfortable and more confident landing his one-two and side stepping Garrett’s pressure in round four.

Tide turned again in round five to Wilson’s pressure but Chuck took it back again in rounds six and seven.  One more swing in round eight with Garrett landing some hard shots that stole the round.

Mussachio dominated rounds nine through eleven.  He employed his stick and move style while Garrett chased him around the ring but never able to cut it off.  Wilson looked lost when Mussachio boxed.  He went into long stretches throughout a round without throwing a punch.

Going into round twelve the majority of press row had Mussachio well ahead with Wilson needing a knockout to win.  To make matters worse for Garrett, Mussachio had taken Wilson’s best and never been badly hurt.

Wilson knew he was behind, as the man known as the Ultimate Warrior came out on the offensive in the final round.  What was somewhat surprising, Mussachio was willing to engage him opposed to being defensive with the lead.  Then early in the round when it seemed Mussachio would cruise to victory, Wilson landed a wide looping right hand directly on the chin. Mussachio went flat down onto his back and appeared to be out cold.  He began to roll up but then rolled over and back down signaling the end of the bout.

Wilson went into a frenzy of excitement knowing that he had pulled out the come from behind knockout to retain his belt.  Wilson knew he has down and had to do something dramatic to walk away with the win.

“Got to, being the ultimate warrior.  Got to go to the end of the battle.  I’m not going to quit, no one will ever see me quit, ever.  Even if I’m down to the last few seconds, I’m going hard to the last second.”

“I felt I was blowing it.  I was like man he’s out jabbing me.  I’m making dumb mistakes.  He’s a skilled fighter.  I’m going all out; if I get knocked down I’m losing anyway.  Just go out there and go all out.”

“I know I needed the knockout.  I tried to get it the first round but didn’t happen that way.  I still got things to learn, I’m learning as I go.”

Both men spoke highly of each other afterwards and proud of the fight they gave the fans.  Mussachio 17-2-2 (5 KO) who seemed to have the fight in the bank was gracious in defeat and stated he did not regret coming out to fight in the final round.

“That’s how boxing goes, I wanted to beat him, you have to beat the champ.  I wanted to go out that last round and didn’t want to skate because I have gotten a couple of draws from skating around the last round.  Especially in a title fight you don’t want to do that.  I felt like I had to go out and win that twelfth round and so did he but he got the better end of it.  No excuses, he landed that punch fair and square.   I was totally healthy and he beat me.”

Like his opponent Wilson 11-5-1 (5 KO) was complimentary of Mussachio after the fight.

But the scores never came into play as Garrett took the fight out of the judge’s hands.  Wilson now retains his USBA strap and looks to move up in the rankings with future bouts.  He knows that he got a learning experience tonight against a slick boxer and has room to grow in future fights.

“Like everybody thought he was gonna out-jab me, which he did.  I knew I had it in me to pull out the knockout but you know at the same time he was tough as nails.” 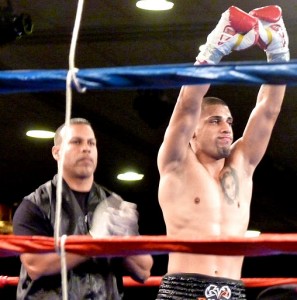 experience along the way.  Cruz’s team has wanted this fight to test the young fighter, and to show he could hurt Adjaho in a way other prospects including Shawn Porter and Joel Julio could not.

Cruz came out boxing in a far more controlled fashion than normal. He fought from a distance rather than push inside looking to work behind his jab.  Cruz took the first round but Adjaho came on in the second.  The taller and rangy Adjaho began putting his jab to use followed by a long right hand and a commitment to body punching.  Rounds two and three were close with each man having his moments of landing flurries.

Adjaho came on strong in round four.  He consistently had Cruz moving backwards landing punches regularly through the round.  Cruz, who normally is the pressure fighter pushing his opponent back, was often being moved around the ring and into the ropes.  Adjaho was picking up steam and gaining confidence as momentum swung his way.

Cruz clearly came out on a mission in round five to establish control of the fight and make his move.  From the opening bell of the round Cruz pushed forward working his jab with three and four punch combinations following.  He quickly became the aggressor and swung the momentum back into his favor.

Gaining momentum quickly Cruz made his mark landing an overhand right that sent Adjaho to the canvas.   Adjaho got up complaining to the referee that he had slipped but it was no use.  A punch landed so the right call was made.  Either way the moment seemed to rattle Adjaho who was more focused on the call than getting back into the fight.  Cruz moved to a southpaw stance as he had done off and on throughout the bout and went after his opponent to finish the job.  He landed a big straight left that sent his opponent down again.  This time it was a clear knockdown that sent Adjaho stumbling backwards and onto the canvas with his back on the ropes.

Again Adjaho got up and again Cruz pressured him looking to finish the job.  Cruz had his man in the corner and was firing away when referee Earl Morton stepped in to stop the bout.  The end came at 2:54 of round five.

Adjaho 25-7 (14 KO) protested the stoppage and he had reason to be upset.  While he had been down twice and Cruz was on him, Adjaho did not seem seriously hurt and likely could have continued.  Either way Cruz had jumped well ahead on points with the knockdowns and seemed on his way to closing out the fight.

Cruz 15-0 (12 KO) got a valuable lesson in only his fifteenth pro fight taking on quality opposition.  In his last few fights he took on tough brawlers but tonight he faced by far the best boxer and most experienced opponent of his young career.  At times he seemed to have difficulty with the experienced boxer but was able to overcome some tough rounds.  He took some good shots well, learned to come back in a fight that could have slipped away, and was able to take back momentum from a fighter that was gaining confidence.

“He was getting that confidence in the fourth round.  That’s why in the fifth round I became more aggressive.”

Cruz gets the KO against a fighter who had only been stopped once before (by Antonio Demarco) and succeeds where several others have failed to knock down and stop Adjaho.

In a phone booth welterweight slugfest, DeCarlo Perez won a controversial unanimous decision over Manuel Guzman.  The veteran tough guy Guzman chased Perez around the ring eating anything Perez had and kept on coming.  Perez was faster and flashier but Guzman landed the harder shots.  The judges rewarded Perez 6-1-1(2 KO) giving him the unanimous decision by scores of 58-55 twice and 57-56.  The Boxing Tribune had it 58-55 for Guzman.  Most of press row also gave the fight to Guzman 7-14-2 (3 KO) and the crowd’s reaction to the decision showed they believed he deserved the decision as well.

Heavyweight prospect Bryant Jennings remained undefeated with a convincing first round TKO of Kevin Franklin.  Jennings, out of Philadelphia landed a big right hand halfway through the round that sent Franklin to the ropes and onto the canvas.  Jennings 11-0 (5 KO) jumped all over Franklin 3-4 (1 KO) once he got up and fired countless unanswered shots.  Franklin’s corner fired in the towel and referee Randy Neumann obliged halting the bout at 1:51 of round one.  Jenkins continues to improve with each bout adding more of an all-around exciting offensive skill set.

Dontre King 6-9-2 (2 KO) took a unanimous decision over Julio Dejesus 5-3-1 (3 KO) in an entertaining scrap winning by scores of 39-37 on all three cards.  Dejesus was the aggressor throughout but King landed the cleaner punches.  The four round bout was fought in the Jr. Welterweight division.

Naim Nelson 3-0 of Philadelphia took a unanimous decision over Deroy Beaton 1-3 of Toms River, NJ in the opening bout.  Nelson won by scores of 39-37 on all three cards in the Jr. Welterweight bout.  Nelson started slow but got moving in round two to take control.

In the walkout fight Antowyan Aikens 3-0 (1 KO) won a unanimous decision over Charles Kirby 1-5 by scores of 40-36 on all three cards in a super middleweight bout.