If Antonio Margarito had his way, he would’ve been jumping for joy and celebrating at The Staples Center 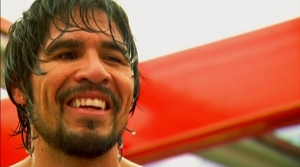 in 2009 while an unconscious, disfigured Shane Mosley poured blood on to the canvas from various open facial wounds. The Tijuana sewer rat would’ve been giving his post-fight interview with a big, dopey grin and yelling “Viva Mexico” with the full knowledge that he was using loaded hand wraps.

I won’t even insult your intelligence with the idea that Javier Capetillo, Margarito’s long-time trainer and father figure, would not have informed Margarito that he was slipping doctored knuckle pads into his wraps. Trainers don’t suddenly change how they wrap a hand or what they use on the hand without letting their fighter know. And fighters, even the most uninformed and disinterested, know when something vastly different is being done to their hands.

Of course, the fighter who was promoted for years as a ferocious beast by a fawning West Coast boxing press, never admitted to any wrongdoing and feigned ignorance as to what was being done by his beloved father figure.

Capetillo took the fall and, if the story is to be believed, cost his poor, clueless fighter his livelihood and reputation. (The tall tale might be slightly believable if Margarito harbored any sort of grudge against this evil man who destroyed his life. Instead, Margarito and Capetillo get along just swell and can barely keep their hands off one another whenever they get within sniffing distance).

A year later, Margarito’s efforts to be reinstated by the CSAC were rejected when it became clear that the fighter still wasn’t accepting any responsibility for what happened, had not made any changes to the way he conducts himself, and had no real intention of respecting the commission’s initial ruling in the first place.

But none of that really mattered. By the time he appeared before the CSAC, he had fought in Mexico and was already signed to fight Manny Pacquiao under the morally bankrupt auspices of the Texas commission and Hall of Fame douche bag commissioner, Dickie Cole. Margarito did not plan on manning up to what had happened and because he was a Top Rank fighter in a Top Rank world with a frustratingly stupid and corrupt media propping him up, he would never have to.

Margarito moved on to a multi-million dollar payday and a one-sided beating from Manny Pacquiao that, literally, left him cockeyed. I would never wish physical harm on a boxer, but what Margarito suffered was as close to justice as could be dished out to a fighter intent on illegally dishing out a similar beating to an opponent (or series of opponents, if you feel he pulled the loaded hand wrap trick before).

Now, the walking head louse is in for another high-profile payday in a rematch against Miguel Cotto at Madison Square Garden this coming Saturday.

For the record, I had been calling BS on Margarito since 2007, wondering aloud to my boxing associates and in chat rooms and on blogs about how a fighter with so poor footwork who throws nothing but arm punches, could generate so much power and, literally, rip opponents to pieces (Ask Sebastian Lujan, who got his ear ripped off his head by the arm-punching Tornado).

Then, when Margarito got busted prior to the Mosley fight, it all made sense.

We’ll never know for sure when Margarito started loading ’em up or, even, if he did it at all prior to the Mosley bout. But it doesn’t make sense that he would just randomly start packing the plaster against Mosley in a bout he was heavily favored to win and not for the Cotto bout, which was the biggest fight of his career and a true pick ’em.

Miguel Cotto contends that Margarito had loaded his wraps for their fight, and it’s a logical assumption based on what we know and have seen. (For the record, Kermit Cintron, following his second KO loss to Margarito, had told the media that Margarito’s punches felt like they were bare-knuckled and stated that it seemed as though he could feel Margarito’s fist through the glove).

Unfortunately for those who favor justice over cynical hype, Margarito is just a bad styles match-up for Cotto and The Tijuana Slug will likely beat him again, make another multi-million dollar pay day, and actually take possession of a world title.

Barring a cave-in of his surgically-repaired right eye, Margarito will do the only thing he knows how to do–come forward like a lump and put pressure on a frazzled, vulnerable Cotto who can’t and won’t be able to stand up to the pressure.

Cotto will always be a better fighter than Margarito, but hand wraps or not, he just can’t beat him.

It’s also unfortunate that Margarito, slithering out from under his rock, will headline a truly spectacular, fan-friendly card with three interesting, entertaining undercard bouts.

As for whether anyone will or should boycott this fight– Well, we all learned from Pacquiao-Margarito that moral indignation always loses out to morbid curiosity. So, I’ll cover Cotto-Margarito II because it’s my job, but I don’t have to be silent about my disgust for an arrogant, cheating scumbag who should still be banished from the sport.

The undercard to the Alvarez-Kermit Cintron main event featured Japan’s Nobuhiro Ishida (24-6-2, 9 KOs), who, one fight ago, knocked out James Kirkland in one round against hapless Edson Espinoza, who was making his professional debut. Needless to say, Espinoza was pulverized in the first round.

Maybe these human sacrifices generated the boxing Karma that had Canelo Promotions struggling to fill the Plaza de Toros to even half-capacity.

You can email Paul at paulmagno@theboxingtribune.com or catch him as he tries to learn the art of sucking up to the “right” people on Twitter. Paul is a full member of the Burger King Kids’ Club and an ordained minister in the Universal Life Church.