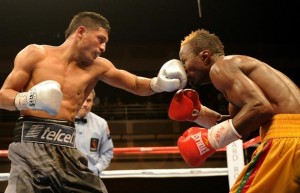 When Abner Mares (22-0-1, 13 KOs) steps into the ring to defend his IBF bantamweight title on Showtime against former titlist, Joseph “King Kong” Agbeko (28-3, 22 KOs), he will be up against the events of their first bout, not to mention competing for viewers with the Cotto-Margarito Pay-Per-View grudge match. When Mares, 26, scored a close split decision victory over Agbeko in their August 13 Bantamweight Tournament Championship bout, it was in a bout filled with back and forth action, repeated low blows, shots on the belt line, and the inaction of referee, Russell Mora.

Mares was warned several times about punches below the belt, and was even awarded a knockdown in a round he was losing when a left uppercut glanced off Agbeko’s glove and landed on his cup, forcing Agbeko to his knees and turning a 9-10 round into a 10-8 round. Mares explained at a press conference this week how he expected a penalty, and was surprised to see Russell Mora begin counting.

“I thought at one point I was going to get penalized, but I just went to a neutral corner and just saw the ref started counting. It’s not my fault. I can’t tell the ref to stop counting,” Mares told reporters at the press conference.

In the end Mares was declared the winner by scores of 115-111 (twice) and 113-113. After the IBF ordered an immediate rematch, Mares decided to do the right thing and put a potential showdown with former WBC and WBO bantamweight champion, Nonito Donaire on hold.

Lost in the half dozen-or-so clear shots below the belt and several others that came close to straying into foul territory, was a great fight pitting two gritty warriors against each other. We saw Mares start the fight like he was shot from a cannon, taking control early on and keeping Agbeko out of any kind of effective rhythm in the early rounds. As the rounds wore on, Mares had to fight back against an increasingly stronger Agbeko.

At one point in the fourth round, Mares pawed with a jab and was rocked by an overhand right, his legs buckled as he nearly sat down on the canvas. When I spoke to Mares he reflected on some of the events of that fight, specifically the right hand he ate in the fourth round.

“Definitely I remember that shot, it was in the 4th round. He caught me with a right over my lazy jab and he caught me good, he wobbled my legs,” he recalled. “It was more like a stunning shot, he hit me and wobbled my legs but I was not hurt. But you know, I took it like a champ and I got right back into the fight.”

Mares stated that he was able to test Agbeko’s power, and he knows that he has to be mindful of it, but won’t fear the punching power of his Ghanaian opponent.

“I felt the punch, but I’m not going to say I felt his power, because I didn’t. He caught me good, and he is a hard hitter and a good fighter; it shows in his record,” Mares said. “But I took his punch well and I can’t wait to fight him again on December 3rd.”

Mares spoke very little of the foul-filled first affair with Agbeko, and one can understand why. On what should have been the biggest night of his career, his win and character were called into question while the win was lost in the inaction of Russell Mora.

“It’s already getting old; I’m already going to fight him again in a different fight,” Mares responded, reiterating that he is making amends by fighting Agbeko again. “All I could say is you can’t throw regular, normal punches with this guy because of the way he fights, the way he leans down.

I think if he [Russell Mora] would have warned me earlier in the fight than maybe none of this would have happened. But again, I’m already going to fight him again.”

Mares would go on to explain how his head was pulled down on a few of the shots that landed low, a tactic that earned a few warnings from Mora to Agbeko. Mares, renowned for his dedication to body punching, insists that he won’t change his tactics on Saturday, but gave assurances of better results.

“I’m definitely planning on working the body this time, because that’s the fighter I am. I work the body. We worked on that in the gym and we’re going to put the pressure on him in this next fight.”

In the first fight, Agbeko was able to turn the fight around in the middle rounds. Mares explained that he has worked on his middle-round-tactics to keep Agbeko from getting on track.

“We just have to fight the way we did in the first round, the first couple rounds,” Mares explained. “Just overwhelm him with my speed and quickness and that’s it, continue with that the whole fight and not let him think in there.

He is a good fighter, but he’s a slow starter. Then he starts to heat up and it’s something that we just have to put early rounds in the bank and that’s it.”

Both Mares and Agbeko are expecting another great fight; Mares has offered his assurances it will be a clean fight this time around. In addition, both men have stated they intend to move up to the super bantamweight division. Mares said he isn’t overlooking Agbeko, and for obvious reasons he is focused wholeheartedly on taking care of business at the Honda Center on Saturday night, setting the record straight, and making fans forget about his forgettable August 13 night.