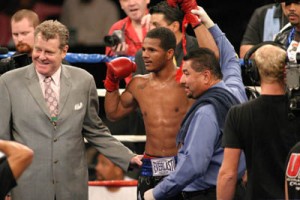 title eliminator, Anthony Dirrell (24-0, 21 KOs) won a TKO in the fourth round against Canada’s Renan St Juste (23-3-1, 15 KOs) when St Juste suffered an injury to his left shoulder.

Dirrell was in control for most of the bout, landing the cleaner, harder shots against his 39-year-old opponent, but showed little in terms of consistent, world class ability in the injury-shortened affair.

The end of the bout came in the fourth when both fighters slammed together in an awkward exchange. Dirrell would suffer a headbutt that caused him to drop to the canvas while St Juste suffered an apparent separated left shoulder. The bout would resume after Dirrell was given a brief rest period and the fighter from Flint, Michigan would go on to land some hard punches against an opponent who was eventually revealed to be a one-armed fighter. After seeing St Juste’s obvious injury, the referee waved off the contest and declared Dirrell the winner.

Dirrell now becomes the mandatory challenger to WBC titlist, Carl Froch, who is set to face Andre Ward in the final bout of the Super Six super middleweight tournament on December 17.