In what promises to be an instant classic, WBO flyweight champ, Brian Viloria (29-3, 16 KOs) looks to make 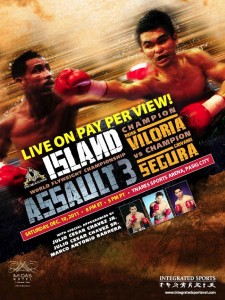 Viloria, who is a dual citizen of the United States and the Philippines, is a two-time junior flyweight world champion who moved up to take the flyweight title from Mexico’s Julio Cesar Miranda last July. In his ten years as a pro, the former US Olympian has been in the ring with the likes of Ulises Solis, Edgar Sosa, Carlos Tamara, Omar Niño Romero, and Gilberto Keb Baas. Viloria is ranked 7th in the flyweight division in The Boxing Tribune’s unbiased world rankings.

“The Aztec Warrior,” Giovani Segura is making his first run at a title in the flyweight division and is best known for his two stoppage wins over future Hall of Famer, Ivan Calderon. The former WBA and WBO junior flyweight champ is regarded as one of the pound for pound best offensive fighters in the sport and has scored KO/TKO victories over Sonny Boy Jaro, Manuel Vargas, and Juanito Rubillar. He also holds decision wins over Cesar Canchila and Carlos Tamara.

The card will be distributed in the U.S. via pay-per-view by Integrated Sports Media.