Former junior flyweight champion, Giovani Segura will remain hospitalized and under observation in a 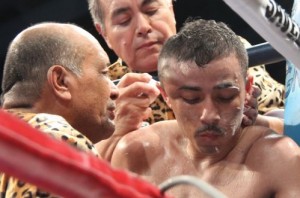 Initial reports indicated a broken orbital as the cause of the grotesque swelling on the upper right side of Segura’s head. However, Filipino fight manager, Aljoe Jaro, who had visited Segura in the hospital on Sunday said that the “Aztec Warrior” had not suffered any sort of fracture, nor, as also rumored, a blood clot.

“Segura only suffered an ugly swelling next to his right eye, but he doesn’t have any sort of internal injury or fracture,” Jaro told ESTO Online Magazine.

Shortly after the statement from Jaro, Segura issued his own words to the public.

“I’m fine,” Segura told his fans via Facebook. “The doctor told me that all I needed was a good rest. I just need for the swelling to go down.

“This was just a bad night and I’ll be champion again. A Mexican doesn’t back down. I lost fair and square and I have to accept it like a man. Period. I just need to work to come back.”