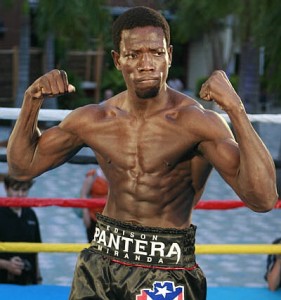 Miranda and Yordanis Despaigne will be featured on the Andre Ward-Carl Froch undercard at the Boardwalk Hall in Atlantic City this Saturday.

Miranda (34-6, 29 KOs), the heavy-handed two-time world title challenger from Colombia will be taking on Australia-based Kenyan, Kariz Kariuki (24-9-2, 19 KOs) in an eight-round contest. Kariuki’s greatest claim to fame is a decision win over former middleweight world title challenger, Randy Griffin, in 2010. In his 35-fight career, he has also suffered losses to Daniel Geale (TKO 11) and Garth Wood (SD 7)

Despaigne (9-1, 4 KOs), a Cuban Olympian with a DQ 5 win over Miranda and a unanimous decision loss to blue-chip prospect, Ismayl Sillakh, will face Houston’s Cornelius White (17-1, 15 KOs), who has mostly fought on the Texas club circuit, but scored a six-round split decision win over veteran journeyman, Dhafir Smith in Atlantic City last July.

Miranda and Despaigne will return against one another on the February 3rd edition of Friday Night Fights as a second part to their entertaining first encounter which saw Miranda drop a fifth round disqualification due to repeated low blows.