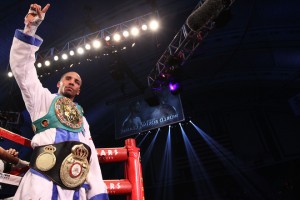 From the opening round, Ward took complete control of the bout, fighting on the outside when he wanted and taking the action inside whenever he chose to do so.

Froch, as tough and as game as he was, had no answer and could not match the speed or guile of his opponent. As the rounds passed, the frustration was evident as the tough Brit, who got to the tournament final with wins over Glen Johnson, Arthur Abraham, and Andre Dirrell, could not muster anything resembling a sustained offensive attack.

On Ward’s part, it was smooth sailing through twelve as he built an early lead with a slick, elusive speed-based attack and then ensured the win by taking the battle inside in the later rounds, smothering Froch’s shots and grappling his way out of any possible danger.

Andre Ward, who beat Froch, Arthur Abraham, Allan Green, and Mikkel Kessler to take the Super Six win, now moves on to a possible bout with IBF titlist, Lucian Bute, although the WBC mandated earlier this week that the winner of Ward-Froch face Anthony Dirrell next.

— Edison Miranda (35-6, 30 KOs), in a light heavyweight bout, stopped Australia-based journeyman, Kariz Kariuki (24-10-2, 19 KOs) in the fifth round of their scheduled eight rounder.