WBC welterweight champ, Floyd Mayweather Jr. will begin the new year with a clean legal slate as he has opted to take plea deals in his two pending criminal cases.

In the more serious case of domestic violence, Mayweather faced felony charges, including coercion, grand larceny and robbery from a September, 2010 incident involving the mother of his three children, Josie Harris. The fighter was accused of assaulting Harris after a heated argument and then taking Harris’ cell phone. 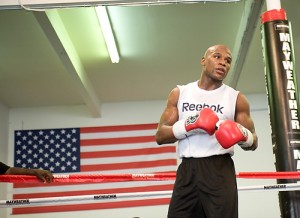 As part of the plea deal, Mayweather faces a $3,000 fine and a jail sentence of at least two days, up to eighteen months. He will enter his plea and be sentenced in Las Vegas Justice Court on Wednesday.

Mayweather also plans to plead no contest next week to a misdemeanor charge of battery for poking a parking lot security guard in the chest in a November, 2010 dispute. The five-division world titlist will have to pay a fine of $1,000.

Last month, Mayweather was found not guilty of two counts of misdemeanor harassment in a case where the fighter engaged in a heated argument with two security guards over parking tickets at the Southern Highlands Estates, the community where Mayweather has his residence.