The division of boxers into divisions based on weight is one of the oldest traditions in the entire sport. It’s why Giovani Segura won’t fight Wladimir Klitschko, why Juan Manuel Marquez was able to gain seven pounds in order to fight Manny Pacquiao, and why tournaments like Super Six are so intriguing, with guys like Andre Ward and Carl Froch and Mikkel 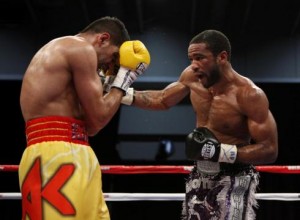 Kessler and Glen Johnson and Allan Green all weighing in within mere ounces of each other. It’s even why we have “pound-for-pound” rankings, precisely because Floyd Mayweather wouldn’t be able to effectively prove whether or not he could beat, say, Bernard Hopkins because at least one if not both guys would be either way too big or way too dried out.

For brevity’s sake, I won’t rank all 17 weight classes (that’s another show.) Instead, I’ll award a bronze, silver, and gold medal to the three best weight classes in all of boxing; consider this a sort of pound-for-pound among the pounds, if you will.

One of boxing’s old-school divisions gave us plenty of great fights in 2011. The big two, of course, were Manny Pacquiao’s complete robbery against Juan Manuel Marquez and Victor Ortiz learning the value of “protect yourself at all times” against Floyd Mayweather. Beyond that, though, you had Ortiz taking the WBC title away from Andre Berto in one hell of a great fight in April and Berto turning around like a scorned schoolyard bully and ripping the IBF strap from Jan Zaveck via TKO beatdown in September, which set up a rematch between Berto and Ortiz that promises to be one of the premier fights of 2012 when it goes down in February.

Below the top echelon of the division, you’ve got up-and-coming prospect Mike Jones, who continues to win fights and develop his skills as he tries to position himself as the Next Big Thing at 147, you’ve got guys like Timothy Bradley and Amir Khan looking to move up in weight to capture big fights, and the talk never really quiets down about the illusory-but-tantalizing prospect of a Pacquiao-Mayweather superfight.

Incidentally, if you’ve ever wondered “what the hell is a welter anyway?”, it’s an old horse racing term in which a “welter weight” of 28 pounds was added to a steeplechase horse in order to give him a handicap and make the other, weaker horses able to make the race competitive. Alternately, they’d put a heavier jockey, who usually weighed closer to 150 pounds than the usual scrawny little jockeys common then as now atop racehorses, on the horse to achieve the same effect. So now you know.

Whatever you may say about Showtime’s Super Six tournament, you can’t shake the feeling that we haven’t seen the best possible fight to be made at this weight. Andre Ward-Lucian Bute may not be Pacquiao-Mayweather, but it’s the second most shameful case of ducking a challenge in the sport this year.

Similarly, take nothing away from Carl Froch, but if you’re holding a fight to crown a unified champion at 168, having the guy who lost to Mikkel Kessler prominently involved casts some doubts on the tournament’s legitimacy. Froch just isn’t the kind of guy who invites the kind of superfight discussion of his contests that even a guy like Victor Ortiz can command—Ortiz-Berto II has a weight and gravity to it that Froch vs. anyone, even Andre Ward, simply doesn’t.

Still, you can’t take away from the fact that super middleweight is one of the deepest divisions in the sport, with great fights to be made from 1 through 10 in the rankings. Your champions, for those following along at home, are Andre Ward (WBC/WBA), Lucian Bute (IBF), and Robert Stieglitz (WBO), your contenders include Mikkel Kessler and Glen Johnson and Arthur Abraham (OK, Abraham’s debatable), and you’ve got as many up-and-comers and question marks (Adonis Stevenson, Librado Andrade, Thomas Oosthuizen) as you can stick in a corner and get the ring announcer to name. And let’s face it, Super Six, for all its ambition ahead of its actual merit, was still a hell of a developing story. But until Andre Ward stops acting like his work in the division is done, I have to deduct two points for pushing and give the title to…

Quick, name as many junior welterweight fighters as you can. You have three minutes.

If you’re any kind of a fight fan, I’m willing to bet you were able to name a fair few guys, especially if you’ve got friends nearby while you’re reading this. Amir Khan, Timothy Bradley, Lamont Peterson, Zab Judah, Kendall Holt, Josesito Lopez, Jessie Vargas, Devon Alexander…not since Kostya Tszyu patrolled the top of this division and guys like Micky Ward and Arturo Gatti put on fights in the middle echelons has 140 pounds been such a deep, entertaining weight class in the sport. Even though Khan and Bradley are both reportedly testing the waters seven pounds up next year, this does not change the fact that 2011 brought us a wealth of great 140 pound fights.

The IBF title changed hands three times; Zab Judah won the title from Kaizer Mabuza, Khan took it from Judah, then Lamont Peterson took it from Khan in a candidate for Fight of the Year in December. Erik Morales resurrected his career and captured the WBC version of the title from Pablo Cesar Cano on the undercard of the Mayweather-Ortiz pay per view, and the WBA…well, let’s not talk about the WBA except to say that Peterson is the super champion because Peterson deserves all the accolades we can give him. Really, the only dog of a fight at this weight all year was the dreadful turd in the chocolate box that was Bradley-Alexander in January, but one bad apple does not, in this case, spoil the whole bunch. Even though things look to change next year, the award for Weight Class of the Year has to go to the guys too big for lightweight and too small for welterweight.

ESPN Friday Night Fights returns January 6, and next week here on The Southpaw, your friendly neighborhood commentator will have a big blowout preview of the first two months of action on the Worldwide Leader. Meanwhile, have a happy Festivus, and make sure you’ve got a better referee than Joe Cooper for your Feats of Strength.

Fox Doucette covers Friday Night Fights for The Boxing Tribune. His weekly column, The Southpaw, appears on Thursdays. He’s never against a good airing of grievances. Fan mail, hate mail, and aluminum poles can be sent to beatcap@gmail.com.