On last Monday’s Rant we paid homage to the Festivus holiday season with an Airing of Grievances. This week we continue with my personal list of hot-button issues.

–No National Commission, No Justice, No Peace

It’s ironic that the most dangerous sport with the greatest need for structure is the one major sport with no real, centralized commission. Oh, there are plenty of governing bodies and worthless state commissions, but nobody’s around to oversee boxing as a whole or establish any sort of standardized quality control. And the reason for this? Simply put– Because none of the sport’s power brokers will allow it. The way boxing is set up, the promoters and managers only stand to lose money and status if the sport is cleaned up. And with these same guys subsidizing the boxing media, don’t expect anybody in the press to bang the drums too loudly for real change. Once in a while, the bought-off media will focus on 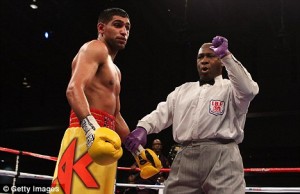 some lousy judge or crappy referee, but don’t expect them to ever go beyond finger-pointing at one or two lowly pawns once or twice a year.

The lack of a real commission or governing body also trickles down to all other aspects of the sport. Don’t blame Amir Khan for pushing in his bouts, when he’s gone twenty-seven fights without it ever being an issue. Because the rules are so selectively enforced and the quality control is so poor when it comes to those officiating or scoring fights, expect continued screw-ups and shady calls for all eternity.

It’s no secret why these judges and referees who make horrible decisions, almost always in favor of the lead promoter’s fighter, keep getting gigs. Those at the top of boxing’s power structure aren’t idiots and wouldn’t be employing incompetent officials just for the sake of empathy. More importantly, they will desperately fight against anything or anyone that seeks to establish a standardized criteria for job performance and for disciplining rogue operators.

So, really, think about this the next time you flip your lid over a lousy call or bad decision. Behind every shady call there’s a referee or judge who knows that they will never get another gig if they rule against the house fighter. And, without a real commission, there’s nothing anybody can do about it.

The fighters who think that they’re going to enjoy lengthier careers by only fighting once or twice a year will very soon be unpleasantly surprised at what awaits them at the tail-end of their career.

Add to the mix the unnatural weight fluctuations that come with the modern day trainer strategy of having their guys fight at artificially low weights. You’re practically begging for diminished returns on a career where longevity is far from guaranteed in the first place.

The move away from same day weigh-ins in the 80’s brought about the idea of trying to cheat the system and compete at a lower weight, only to rehydrate to their natural size, all within the 24-hour period between weigh-in and fight time.

However, this only adds to the mileage on a fighter’s inner odometer.

Inactivity and frequent weight fluctuations are far more detrimental to a fighter’s career than the stresses and strains of the actual fights.

And from a business point of view, a fighter with two fights on HBO will generate less of a buzz than one who fights twice on HBO, once on ESPN, and once on the NBC Sports Network. When more people have seen a fighter, more people will be willing to pay to see him. It only stands to reason.

Of course, this leads us into the evil of allowing networks (and promoters for that matter) to sign fighters to exclusive contracts, but that’s a rant for another day.

(More Airing of Grievances Next Week)

You can email Paul at paulmagno@theboxingtribune.com or catch him as he prepares himself for an even more aggressive year of ranting and raving in 2012. Paul is a full member of the Burger King Kids’ Club, a born iconoclast, and an ordained minister in the Universal Life Church.