In the scathing address, aired publicly on Ustream, Martinez aired his grievances against the entire system of boxing politics which has gradually removed him from the championship picture following his 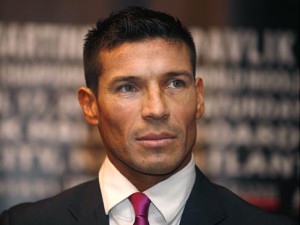 2010 win over Kelly Pavlik to become the WBO/WBC middleweight champ and the undisputed top 160 lb. fighter in the world.

“I’m not planning to defend the WBC Diamond belt anymore,” Martinez said. “The only title I’m going to defend from now on is the title I won after beating Kelly Pavlik, the Ring Magazine title. I won’t ever represent the WBC ever again, until the WBC makes the fight they ordered at the WBC convention [against Chavez]. They won’t honor their own agreement. I hate the coward that Chavez Jr. displays, as well as his coach Freddie Roach, and his promoter Bob Arum, for avoiding me every day. I never thought a world champion could avoid someone in this way.”

Martinez would go on to tell the media that he was also unhappy with the way HBO has handled his career and that he will leave the network in favor of premium channel rival, Showtime.

The issues with Martinez began shortly after winning the WBO and WBC belts against Pavlik in April of 2010 when boxing politics from the sanctioning bodies forced him to choose which of the two belts he would keep.

Martinez opted for the WBC title and defended the belt once, via TKO 2 over Paul Williams, before being forced to vacate when HBO refused to purchase his WBC mandated bout against then-interim middleweight titlist, Sebastian Zbik.

To placate the disgruntled fighter from Argentina, the WBC named Martinez Champion Emeritus, offered up the recently-invented Diamond Belt, and, more importantly, committed to a bout with newly crowned champ, Julio Cesar Chavez Jr., who beat Sebastian Zbik for the title in June of 2011.

At the recent WBC convention in Las Vegas, Martinez reminded the organization of their commitment to the Chavez bout, “no later than March of 2012,” even presenting the cloth dinner napkin where organization officials committed to the fight in writing.

However, despite the WBC’s acknowledgement of their promise and even after several public confirmations from WBC President, Jose Sulaiman, plans are still going through for a February bout in San Antonio, Texas featuring Chavez Jr. and Marco Antonio Rubio.

As first reported by The Boxing Tribune, Chavez-Rubio, despite the talk of a mandatory Martinez fight, was never really in doubt nor were any plans made to deviate from this initial decision.

Martinez’s public statement Thursday is actually a blessing in disguise for Chavez Jr., Arum, and the WBC since, now, Martinez has removed himself from the picture and will no longer be able to force the WBC to live up to its word.

Martinez will now go ahead with his back-up plan, a March 17th bout against the UK’s Matthew Macklin at Madison Square Garden in New York.