There was no need to strap a world title belt around Julio Cesar Chavez Jr.’s waist.

The WBC was getting their 3% from then-champ, Sergio Martinez, who was gainfully employed by HBO. Top Rank CEO, Bob Arum, had no real problem promoting the name “Chavez” to the millions of Mexican and Mexican-Americans fans who still remember a true legend of the sport, Julio Cesar Chavez. The son of the legend, Julio Jr., was not going broke with marginal bouts against marginal opposition for curious fans across Mexico and in US cities with heavy latino populations.

The traveling circus could’ve gone on indefinitely. Fans would’ve known that the 25-year-old second generation star was not really an elite fighter just yet, but as long as he put on a good show, it 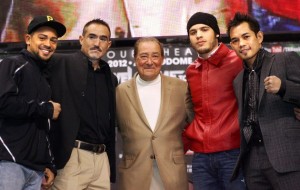 would’ve been fine. Eventually he’d develop into an elite fighter, or he wouldn’t– but no harm, no foul. Fans will forgive someone fighting up to the level of their opposition. What they will not tolerate, however, is someone claiming glory that simply doesn’t belong to them.

By accepting the helping hand and taking the cut in line offered by the Mexico City-based WBC, Team Chavez incurred the wrath of every hardcore fight fan with blue collar sensibilities. How can Jr. be a world titlist when he didn’t beat anyone in the Top 5 to get the title? How can he keep calling himself the middleweight champ when there is already a consensus middleweight champ who is not only ready and willing to fight him, but has been tirelessly pursuing him for about a year?

Even the dullest of dullards knows a sham when they see one and it shouldn’t come as a surprise that a significant backlash has grown to slap Chavez in the baby face.

Chavez is not that bad of a fighter, and certainly not the bumbling fool critics have made him out to be. But when he smugly carries that green title belt over his shoulder, someone should point out that he’s making a real buffoon of himself and making it harder to get the respect he feels he deserves. To hardcore boxing fans who know better, he might as well be wearing scuba fins and calling himself a Navy SEAL.

The February 4th card in San Antonio, Texas, featuring Chavez against a tough Marco Antonio Rubio and Nonito Donaire vs. Wilfredo Vazquez Jr. is a really good double bill. Fans should be treated to two competitive, entertaining contests. The one thing that tarnishes the whole event, though, is that bogus WBC middleweight title in Chavez’s possession.

Fans could opt to ignore the meaningless jewelry around the Boy-King’s waist, but feigning ignorance doesn’t really fix anything, especially when the issue involves a pretender holding the belt that once belonged to Carlos Monzon, Marvin Hagler, and Bernard Hopkins.

Things didn’t have to work out this way. When the WBC approached Chavez with the belt and an agenda to make some extra cash off a big name, the fighter and his team could’ve turned them away. Jr. certainly didn’t need the title to make money and a run at the real champ would always have been on the table whenever his crew thought he was ready to compete.

Instead, they grabbed what they could, when they could, and with little regard for the sport or the intelligence of the fans. The idea being, as usual, that after some hype and a few friendly write-ups, boxing fans will get over their outrage and forget the abuse to the narrative and logic of the sport.

Team Chavez is probably right and many fans, come February 4th, will have long forgotten Sergio Martinez and the smug defiance of Chavez’s insistence that he is the real middleweight champ.

Still, it would’ve been nice to see someone turn down a meaningless trinket out of respect for the intelligence of the fans and the overall health of the sport.