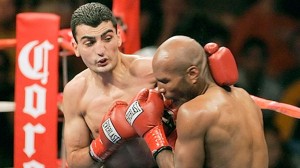 At the age of twenty-five, Martirosyan comes into this fight undefeated and ranked 9th in the world among junior middleweights according to The Boxing Tribune.  Martirosyan is coming off a UD win over Richard Gutierrez and has recently faced Saul Roman and Kassim Ouma.  In this “stay-busy” bout, the young up-and-comer is unlikely to gain any new fans as he has already been criticized for not taking on tougher competition.

Forty-one-year-old Lowry is coming off a knockout win, but also comes into this bout having lost eight of his last ten.  He’s been in the ring with Andy Lee, Anthony Bonsante and Yuri Foreman; on Saturday he will add another notable to the list with Martirosyan.

The fight card will also feature six other bouts on the undercard including Wale Omitoso (20-0, 17KOs) vs. Nestor Ramos (2-1, 1KO) in the welterweight division.  All fights will take place in San Antonio, Texas at the Alamodome with doors opening at 6:30pm central.