At the press conference following his impressive fifth round TKO over Peter Manfredo Jr. last November, Julio Cesar Chavez Jr., along with promoter Bob Arum, were peppered with a litany of questions surrounding who the fighter’s next opponent would be. 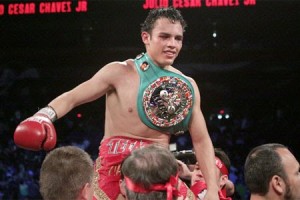 As is the case most often, promoter and fighter spoke of lining up huge names for the future.  Sergio Martinez, who (with an almost disinterested disposition) sat in the same room as they spoke, was mentioned as a candidate, along with Saul “Canelo” Alvarez, Miguel Cotto and Antonio Margarito.  When asked specifically whether or not he thought he was now ready for such a huge test, Chavez Jr. delivered a response consistent with the company line.

Since that night, and perhaps even before, fight fans have eagerly anticipated the undefeated Mexican fighter’s step up in competition.  While Manfredo Jr. was a game competitor, the fact remains that he was simply outgunned that night by the naturally bigger, stronger and more skilled opponent.

And while the opponent Top Rank’s CEO Bob Arum lined up for Chavez Jr. isn’t quite on par with the list of names bandied around back in November, the rugged slugger Marco Antonio Rubio does provide another big step in right direction for the 26-year-old, undefeated WBC titlist.  Rubio is tough as nails and comes to fight, and he’s been in the ring with a level of competition his opponent has hasn’t come close to.

Let’s face it, lots of fight fans just don’t like Julio Cesar Chavez Jr., and it has nothing to do with what has actually gone on inside the ring.  It started when he began his career at age 17 headlining minor PPV cards based on name-value alone.

Being the son of a legendary champion is hard enough, but using your father’s notoriety to prop yourself up past where you belong in a sport where most guys have to fight and scrap their way onto undercards alone, just rubs people the wrong way.

But regardless of how he did it, he didn’t lose any of those fights, and he’s shown steady improvement along the way to boot.  While there’s certainly a vocal contingent of boxing fans out there rooting for him to fail, his consecutive fights headlining HBO cards is quite possibly evidence of–dare it be said–a burgeoning acceptance among the boxing community.

And for good reason.

Under the careful tutelage of world famous trainer Freddie Roach, Chavez Jr. seems to display newly polished skills with each and every effort.  In his last fight, the always ready-to-rumble fighter used a stiff jab and his lanky frame to set up the knockout.  He’ll need to do the same against Rubio.

Rubio, a fellow Mexican fighter, comes into this fight with a wealth of experience on his side bolstered by an impressive tally of recent successes.  He’s won ten consecutive fights, with nine of them coming by TKO, since his last loss way back in February of 2009 against the then-more-formidable Kelly Pavlik.

If you ask a boxing fan on the street who should win this fight, you’ll get a perhaps surprising number of votes for Rubio to pull the upset and to do it by knockout.  While a bit of that likely attributed to that vocal contingent that just wants Chavez Jr. to lose, it’s at least in some small part also because Marco Antonio Rubio is just a damn good fighter.

So for Julio Cesar Chavez Jr., this one is big.

A win against Rubio does several important things.  It validates what Team Chavez already believes about their fighter: that he’s a legitimate top level competitor headed towards the upper echelon of the sport.  It proves that maybe those headlining PPVs cards way back at the beginning of his career were more warranted than people believed at the time.  And it sets him on an inevitable collision course, barring any sort of promoter/sanctioning body shenanigans, with superstar champion Sergio Martinez for the real middleweight championship of the world.

And if he looks good enough in defeating Rubio, it could mean that a clash with Martinez would be a better fight than most people think.