A week after chief pound-for-pound rival, Floyd Mayweather, claimed Miguel Cotto as his next opponent, Filipino superstar, Manny Pacquiao, is making early week headlines with the announcement of his upcoming bout against junior welterweight titlist, Timothy Bradley, on June 9th at the MGM Grand in Las Vegas.

Bradley (28-0, 12 KOs), a native of Palm Springs, California, is ranked #1 in the junior welterweight division by The Boxing Tribune and is the current WBO world titlist.

The 28-year-old, although lacking in technical fluidity and grace, is known for an aggressive mindset as well as an 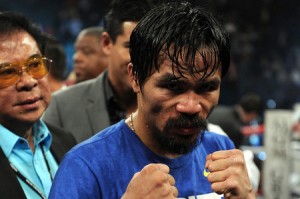 awkward come-forward style that has often produced cuts and injuries from headbutts.

It wouldn’t be too much of a stretch to say that Bradley likely represents the freshest, closest-to-prime opponent Pacquiao has faced since his 2008 bout against Juan Manuel Marquez. And with names like Devon Alexander, Lamont Peterson, Kendall Holt, Junior Witter, and Nate Campbell on his resume, few could argue with Bradley’s worthiness of such a high profile bout.

Manny Pacquiao (54-3-2, 38 KOs), usually a media darling, found himself taking criticism over the last half of 2011 for less-than-stellar outings against Juan Manuel Marquez and Shane Mosley and in the early part of 2012 for his role in a Mayweather bout once again not happening.

While both fighters have yet to sign contracts for the bout, all terms have been agreed upon and the promotional machine for Pacquiao-Bradley is starting to be revved up. Terms have yet to be announced, but the assumption is that the bout will be for Pacquiao’s WBO welterweight title.