Despite rumors circulating that he would be signing a two-fight deal with Top Rank matching him against Juan Manuel Marquez in Cowboys Stadium with a possible Manny Pacquiao fight taking place in the Fall, WBA/IBF junior welterweight champ, Lamont Peterson (30-1-1, 15 KOs), came to terms with former champ, Amir Khan (26-2, 18 KOs) , for a May 19th rematch.

Their first bout, in December of last year, saw Peterson take a controversial split decision over the UK’s defending two-belt world champ, Khan. With no rematch clause and increasingly strained relations between both camps amid cries 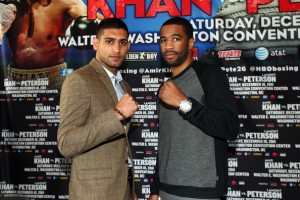 of foul play from Khan, the rematch was greatly in doubt. Making things more difficult was the interest expressed in Peterson by Top Rank.

Ultimately, however, the deal offered to Peterson for a Khan rematch, which included a 50/50 revenue split across the board, was far more lucrative than a Marquez contest and a non-binding promise of Pacquiao consideration.

The HBO-televised bout will take place at the Mandalay Bay in Las Vegas.