Alexander Povetkin (23-0, 16 KOs) will face Marco Huck (34-1, 25 KOs) on Saturday, February 25th in Stuttgart, Germany.  The fight will be televised live in the U.S. exclusively by EPIX.  As with past boxing shows carried by EPIX, it will also stream live on EPIXHD.com.  Boxing fans can sign up for the stream, which has yet to be anything but problematic, for free with an email address.

Povetkin is best known for a few things that aren’t really what fighters clamor to be known for.  First, he’s a heavyweight titlist…but not really.  Povetkin defeated Ruslan Chagaev in August of 2011 to be something the WBA is calling its “Regular” champion after having “elevated” Wladimir Klitschko, who 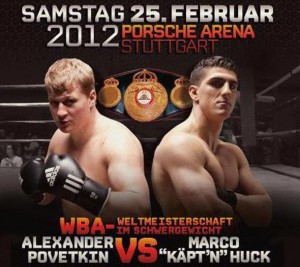 defeated David Haye for the real WBA title, to “Super” champion.  All that really means is that Povetkin, while carrying around a WBA title belt, isn’t the real WBA champion: Wladimir Klitschko is.  As such, he is not recognized as champion by this publication, though you may see him bandied around as such in other places.

Next, Povetkin is known as a protégé of legendary trainer Teddy Atlas.  Boxing has a long history of great champions paired with equally great trainers—that’s not the issue.  What is the issue, is that many boxing aficionados have attributed Povetkin’s success more to Atlas than to the fighter himself.  That’d be like attributing more of Muhammad Ali’s success to Angelo Dundee than to Ali.

Maybe it has something to do with it, and maybe it doesn’t, but this will be Povetkin’s first fight without Atlas since the trainer started working with him in 2009.

Third, Povetkin has been brought along slowly—we’re talking glacially paced slowness here folks.  Atlas was brought in three years ago to specifically prepare Povetkin for dethroning a Klitschko.  Despite numerous opportunities to make the fight, though, he’s refrained.  Instead, he’s plodded along, mixing upper class has-beens like Chagaev with “no hopers” like Nicolai Firtha along the way.

It’s been less than impressive.

Yet, despite it all, Povetkin is ranked 3rd among heavyweights in the world by any ratings board worth its salt, and rightfully so.  Until proven otherwise, Alexander Povetkin remains the best heavyweight in the world not named Wlad or Vitali Klitschko.

Huck is most certainly not a has-been or a “no hoper.”  He’s a young, tough and hungry cruiserweight looking to make a splash in boxing’s money division–and he hopes it’s a big one.  The WBO cruiserweight champion is ranked number 1 in the world by The Boxing Tribune.  He hasn’t lost a fight since his lone setback against the formidable Steve Cunningham way back in 2007.  He’s a good boxer who likes to mix it up, and he’s confident he’ll be able to compete with the larger Povetkin.

“I would not have taken the fight if I didn’t believe in myself,” he said at the press conference on Wednesday.  “Povetkin is good, but I can beat him.  We once did sparring together, and he has bad memories of me.  On Saturday I will be the new champ.  He is going down!”

But can he really compete at (almost) the highest level of a division he’s moving up in weight to compete in?  Povetkin is not so sure.

“At first I was surprised about Huck’s challenge,” he said, “because he has never fought at heavyweight before.  But I am happy to defend my title against anybody out there.  I am in great shape and I will win.”

If boxing fans know anything, it’s that a good big fighter beats a good small fighter.  But that’s the question with this fight.  Povetkin is most certainly a good fighter.  Most would say the same thing about Marco Huck.  Are either of them great?  Can Povetkin deliver the type of performance that vaults him into a fight against a Klitschko?  Can Huck follow the footsteps of former cruiserweights like Evander Holyfield and David Haye who were able to overcome size differences and become heavyweight champions?

We find out Saturday.

Prediction–Povetkin and Huck put on a good show.  Huck shows his mettle early and lands big shots but Povetkin earns the decision victory as the smaller fighter loses steam when they head into the championship rounds.  Meanwhile, fight fans in the U.S. trying to watch the fight on the EPIXHD.com scream and yell at every freeze frame they have to endure until they finally give up and try to find the fight elsewhere.