Middleweight contender, Marco Antonio Rubio, made good on his promises to file a protest over his February 4th unanimous decision loss to WBC middleweight titlist, Julio Cesar Chavez Jr., at the Alamodome in San Antonio, Texas.

According to the protest filed with the WBC, several violations were committed over the course of the championship bout as well as during the lead-in to the encounter. 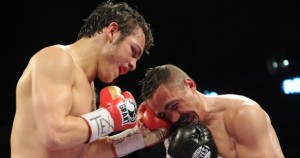 Rubio and his promoter, Promociones del Pueblo, point to the lack of post-fight anti-doping as a violation of the WBC’s own bylaws and also question whether Chavez was given the organization-mandated 30-day and 7-day pre-fight weigh-ins.

Chavez, who was arrested on a DUI charge just twelve days prior to the Rubio bout, was listed at 175 lbs on the police report, well above the 5% over the limit allowed by the organization in the seven day pre-fight weigh-in.

Chavez has had a long history of struggling to make weight and even tested positive for a diuretic following his bout with Troy Rowland in 2009.

To handle the case, Rubio’s team retained the services of attorney Richard Dolan, who successfully sued the WBC in the multi-million dollar 1998 Graciano Rocchigiani case which nearly forced the organization to close its doors.

Rubio is hoping to have the unanimous decision loss changed to a no contest.

WBC President for Life, Jose Sulaiman, spoke to members of the Mexican media today, pointing out that Rubio was also not subject to the anti-doping tests or the pre-fight weigh-ins and that the testing oversight is the responsibility of the Texas commission, not the WBC.

“The World Boxing Council has no problem going to court. We’ll prepare our attorneys,” Sulaiman told the press. “We’ll win this legal battle without breaking a sweat.”