There’s only one road to redemption for Juan Manuel Lopez–and that road takes him to Orlando Salido, the man who stopped Lopez and took his WBO featherweight title eleven months ago in the middle of a partisan pro-Lopez crowd in Puerto Rico. 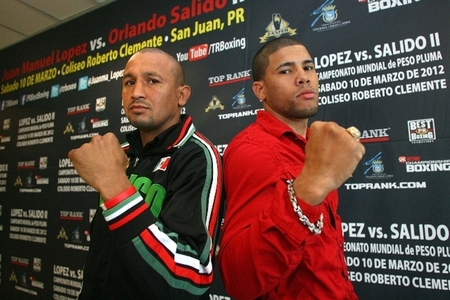 One gets the feeling that Lopez’s people would’ve preferred another route to redemption. Salido isn’t a big-ticket draw and, frankly, is a legitimate bad-ass and the type of well-seasoned truth-detecting fighter who can dissect pretenders and those who haven’t taken their training seriously.

Unfortunately for Lopez (31-1, 28 KOs) though, the featherweight division isn’t what it used to be.

Yuriorkis Gamboa has gone up in weight, Indonesia’s Chris John has decided to stay at home and fight second-tier challengers, and the rest of the players at 126 rank significantly below the mark Lopez had left before being shocked by Salido.

So, after some stalling and some exploring of other avenues, Lopez is back to Salido and Salido (37-11-2, 25 KOs), whose only chance at a real payday is against Lopez, has also come around to a Lopez rematch after some initial balking.

One learning experience and eleven months later, and the questions around Lopez still remain.

The charismatic Puerto Rican was an amateur star brought along carefully and treated like the potential gold mine that he was. Lopez would develop into a fan-friendly fighter, solid in a lot of areas, but spectacular in none. His saving grace was always a thudding left hand and a monstrous right coming from the southpaw stance.

Then, things started falling apart. As is the case with many 20-something stars making big money and living a big lifestyle, Lopez succumbed to the night life. Training was becoming gradually less intense and a crew of hangers-on and professional partiers started occupying much of his time.

Some fighters can go for years before the night life begins to eat away at the professional product. In Lopez’s case, the results were almost immediate.

The biggest warning flag came against Rogers Mtagwa in 2009 when Lopez completely ran out of gas late in the fight and was almost stopped by the journeyman from Tanzania. Many would suggest that the completely one-sided twelfth round was only allowed to continue because Lopez was playing to a packed Puerto Rican crowd at Madison Square Garden and because his promoter, Top Rank, was positioning him to be the heir apparent to Miguel Cotto on the Boricua boxing throne.

In subsequent fights, Lopez began to look flat and sluggish. He was dropped by fringe contender, Bernabe Concepcion, in the first round before stopping the Filipino in the second. Then, he would go on to have a tougher time than expected against faded Mexican star, Rafael Marquez, before a shoulder injury forced Marquez to retire between rounds eight and nine.

After the Marquez fight, Lopez walked into his next title defense primed for an upset–and Orlando Salido happily obliged.

Salido, from Ciudad Obregon, Sonora, Mexico, is the very definition of “old school.” Never an amateur star or blue chip prospect, “Siri” was just another pug on the Mexican club scene, paying his dues and learning along the way.

Losses on the road to more experienced club fighters built character and defeats at the hands of Juan Manuel Marquez, Alejandro Gonzalez, and Cristobal Cruz built class. Along the way, though, Salido had his share of victories as well–beating Rogers Mtagwa, Cesar Soto, Cristobal Cruz in a rematch for the IBF featherweight title, and Robert Guerrero (in a bout that was later declared a no contest after Salido tested positive for the anabolic steroid, Nandrolone).

By the time he lost to Cuba’s Yuriorkis Gamboa via unanimous decision in 2010 and relinquished his IBF strap, the one-time car thief and street thug had already made a name for himself as a blue-collar, no-nonsense battler who knew every trick in the book.

When Salido walked into the Coliseo Ruben Rodriguez in Bayamon, Puerto Rico to challenge for Lopez’s WBO 126 lb title, he was treated as a mere speed bump to glory by most in the media, but those “in the know” considered him a very live underdog–and Salido responded accordingly.

After four fairly even rounds, Salido proceeded to disassemble a Lopez who had no back-up plan and began to fade fast when his Mexican rival put on the heat.

Following a knockdown at the end of the fifth, Salido took his time with the buzzed champion. He walked Lopez down and threw copious amounts of right hands–like any old pro would do against a southpaw–eventually forcing Puerto Rican referee, Roberto Ramirez Jr., to stop the fight in the eighth.

Since the upset, Salido has made one defense of the title, stopping hapless challenger, Japan’s Kenichi Yamaguchi in the eleventh round and then surviving two hard knockdowns before stopping Filipino, Weng Haya, in the eighth round of a ten-round non-title contest. In both of those bouts, Salido looked startlingly unspectacular, almost looking the role of a journeyman play-acting as champion. But, of course, Salido has the reputation of fighting up to (or down to) the level of his opposition.

Lopez, since his TKO 8 loss, stopped journeyman, Mike Oliver, in the second round of a scheduled twelve-round bout in the same ring where he dropped the title to Salido. Lopez looked strong and, by all accounts, didn’t struggle to make the featherweight limit. But not much was learned from beating the overmatched Oliver, who was, literally, wobbled by every punch Lopez landed.

This Saturday, Salido goes back to Puerto Rico to face Lopez. Things have changed, but not really.

Of course, Salido is now the defending WBO champ and Lopez is the challenger.

Also, referee, Roberto Ramirez Sr., is taking the place of his son, Robert Jr., and instead of fighting at the Coliseo Ruben Rodriguez in Bayamon, they’ll be fighting in San Juan at the Coliseo Roberto Clemente.

But Lopez is still the heavy-handed star with a variable work ethic. Salido is still the old-school, blue-collar fighter who learned his boxing lessons the hard way.

Lopez has the spark of greatness when he is 100% right and focused, but the great intangible in this rematch is whether that spark will still be there when the action gets hot and heavy. On the other side of the ring, Salido is Salido and will be the same fighter no matter what.

Lopez’s success completely depends on whether his humbling lesson last April has matured him as a man and as a fighter. Lopez, the man, should be able to handle Salido. Lopez, the tabloid star, will be soundly defeated again.

Salido vs. Lopez II will be aired Saturday, March 10 on Showtime at 10pm ET/PT