Houston, TX — Danny “Swift” Garcia (23-0, 14 KOs) was too young and too strong for aging Mexican warrior Erik Morales (52-8, 36 KOs) Saturday night, as he defeated the wily veteran with a combination of sharp counterpunches and youthful vigor.  In doing so, Garcia earned the WBC junior welterweight title Morales lost on the scale the day before by weighing two pounds over the 140 lb limit.

Garcia came out much more careful than many thought he would.  He was content to have the veteran Morales bring the fight to him, and it worked in his favor in the eyes of the judges.

Garcia took home the unanimous decision by scores of 117-110, 116-112, 118-109.  The Boxing Tribune scored the fight much closer, as did many ringside observers, but no one took issue with Garcia taking home the victory – not even Erik Morales.

“I felt I was losing the fight,” Morales said afterwards.

Morales brought the fight to Garcia in the first and second rounds.  Garcia tried to counter but was getting hit with carefully placed punches by the cagey Morales who was displaying pinpoint accuracy and timing.

The tide turned in the third.

Garcia hit Morales hard in round three and “El Terrible” was hurled towards the ropes by the sheer ferocity of the blow.  Morales grinned and shook his head at him as if to say he couldn’t be hurt, but in fact he could.

The action was back-and-forth in the fourth and fifth rounds.  Morales alternated between being the careful technician and charging ahead with fierce flurries.  Garcia did his best to counter his opponent with clean, hard shots.

In round six, Garcia came on strong to land heavy blows on the head and body of Morales .  Morales was up against the ropes for most of the round until he erupted against Garcia in the center of the ring.  Morales even had Garcia on the ropes for a bit, but his flurry of punches didn’t have the same effect that the younger Garcia’s blows were having on him.

Ever the showman, Morales put on a fantastic effort against his youthful counterpart.  He’d make Garcia miss wildly, make gestures to the crowd about it and then grin like a kid in a candy store at his bewildered assailant.  But Garcia was landing the harder blows and it showed.

Both fighters had success in the ninth, but Garcia got the best of it towards the end of the very close round.

Morales gave his best effort in round ten, landing clean, educated blows from long range as well as flurries of combos when he got in close.  By the end of it, he even had Garcia bleeding from the nose and breathing out his mouth.

But the next round was all Garcia.  He caught the brave Morales with a perfect left hook to send him down to the canvas in round eleven, and out-boxed him in the twelfth to take home the win.

The 24-year-old Garcia was all smiles afterwards.  He had exclaimed all week, to any one who would listen, that he was on his way to being a champion and now he was. 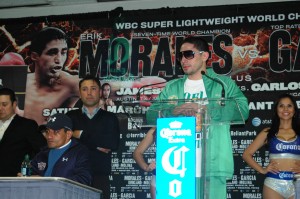 Meanwhile, Morales was somber but not sad.  He recognized he wasn’t the fighter he once was, but was proud of the effort he gave both in the fight and in his tremendous career.

“There’s not much to say…time has passed.”