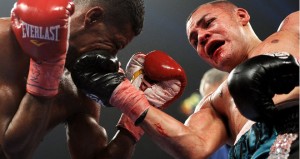 Alvarado, the former 2001 amateur national champion, has had his pro career side tracked by personal problems. After early wins over Carlos Molina and Michael Clark, Alvarado served five months in prison in 2009 for violating his probation stemming from traffic and domestic violence charges. He returned in 2010 and knocked Lenin Arroyo out in two rounds before four straight wins over nondescript opponents. In Alvarado’s last fight he was out-boxed by Breidis Prescott in the early rounds, but came back to score a TKO win in the tenth and final round while behind on the scorecards 87-84 (twice) and 86-85.

Herrera, ranked number 8 at junior welterweight by The Boxing Tribune, had a big 2011 on ESPN’s Friday Night Fights. After dropping a split decision to fringe contender Mike Anchondo in 2009, he grabbed two easy wins over club fighters in 2010 and secured his spot against Ruslan Provdonikov to open the FNF 2011 season. Herrera scored a unanimous decision victory over Provodnikov in a close, action brawl that endured as one of the better fights of the year, earning a return to the FNF airwaves in June. Herrera upset the previously undefeated Mike Dallas Jr., but has remained inactive since the win.