A couple of weeks ago I answered an ad to fill the boxing historian vacancy left by the dearly departed Bert Sugar when The Sh-t List Makers Association of America commissioned a list for the 10 greatest middleweights who were lightweights.

Since I have taken to smoking cigars and wearing fedoras, I am now The Boxing Tribune’s self-proclaimed “historian” as well as the new official unofficial top 10 list maker.

One of the many perks of being a boxing historian is you get to make up top ten lists and if you write enough of them you could publish them all in a book.

All it takes to become a boxing historian in this day and age of the internet is to visit BoxRec a couple of times and watch some grainy footage on YouTube of Jack Johnson, Willie Pep or Sugar Ray Robinson in action.

You also get extra points if you sit through the entire rap music video “Young Man Rumble” by that notorious gangsta rapper Max Kellerman. Oh and I almost forgot the most important prerequisite of all, you must own an old copy of the Ring Magazine from those honest and glorious Nat Fleischer days.

Others have tried and failed miserably, but I have thrived and excelled at compiling the biggest, baddest, most definitive top ten lists you will ever read.

So pour yourself a drink and light up that crusty old cigar because it’s time to make those great boxing “storytellers” of yesteryear roll in their graves.

Okay how does Felix Sturm make the 10 greatest middleweights that were lightweights when he never fought at the 135-pound weight limit? Well there is no better way to kick off a top ten list than by bestowing such an honor to an undeserving fighter. Placing an undeserving fighter such as Sturm at number 10 immediately infuriates the readers and drives up the number of page views. More page views equals more cash in ad revenue. CA-CHING!

Arturo Gatti fought three times as a lightweight and once as a middleweight when he failed to make the contracted weight of 140-pounds for his fight against Joey Gamache.
Gatti entered the ring on February 26, 2000 as an unofficial middleweight. HBO reported Gatti’s unofficial weight on the night of the fight as 160 pounds while Gamache tipped the scales at 145 pounds. Gatti nearly killed Gamache with a frightening second round knockout. Gamache was lucky to escape Madison Square Garden with his life, but suffered permanent brain damage thanks to Gatti’s unfair weight advantage.

In his last professional fight “Sweat Pea” Whitaker weighed in at 155 pounds thus making him a middleweight against junior middleweight journeyman Carlos Bojorquez. Whitaker lost the fight by TKO when he suffered a broken left clavicle.

Yes, I made my very own top ten list. At one point in my life I was a 135-pound first grader, but I quickly ate my way up to middleweight once I hit the third grade. My record as a middleweight was flawless. Those 50-pound second graders had no chance at keeping their school lunches away from me.

The “Golden Boy” would be ranked number one if this list was compiled by the incomparable writers over at the “Bible of Boxing.”

The Pazmanian Devil started his career as a lightweight and ended it as a super middleweight, but he makes this list for being the most exciting defensive specialist of his time thanks to his uncanny skill to block every single punch with his face. 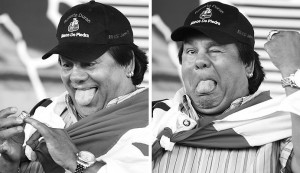 Duran is arguably the greatest lightweight of all-time, but his stay at middleweight was less than stellar, going 1-3 in championship fights. Yet, there is no shame in losing to one of the greatest middleweight champions ever in “Marvelous” Marvin Hagler. Just like there is no shame in quitting against Ray Leonard, getting KTFO by Thomas Hearns or going 0-4 against Vinny Paz and Hector Camacho as a 50-year-old super middleweight.

A little known fact about Macho Camacho is he was once a stunt double for Rene Ruiz (aka Tun Tun) in the 1988 comedy Tres Lancheros Muy Picudos.

I looked into the future and saw Manny Pacquiao fighting as a blown-up middleweight. You too can see Manny fighting as a middleweight if you follow these simple steps. Close your eyes and take a deep breath. Count backwards starting from ten. Do you see him? Don’t be alarmed, Manny isn’t cut, he’s just packing a flabby gut. He’s making a comeback following his failed Presidential campaign against the undisputed middleweight champion Saul “Canelo” Alvarez. Now for all you Pacquiao fans out there, count to ten and open your eyes before you see him on the receiving end of the 2018 KO of the year.

Paul is the greatest middleweight lightweight of all-time for one simple reason. He is The Boss here at The Boxing Tribune and I was contractually obligated to rank him as such.

Alphonso Costello is a member of The Sh-it List Makers Association of America (SMAA). You could also find his work at www.FightClubWriter.com