I haven’t been so amused by a grotesque cast of characters since back in ’97  when I watched the original The Hills Have Eyes in a Santa Fe, NM Motel 6 while tripping on acid with a Native American girl I met in a Greyhound bus station earlier that day (Long story).

Floyd Mayweather was being walked to the ring by Justin Bieber, Yuriorkis Gamboa, 50 Cent, and pro wrestler, Triple H. In the crowd, with the discount J-Lo booby dress, was Miss Jackson, Mayweather’s significant other and a dead ringer for the tranny version of Kim Kardashian from the “What a Drag” Vegas stage show. A few seats away was Lil Wayne, a tatted- up rapper who looks like the zombie Sammy Davis Jr. 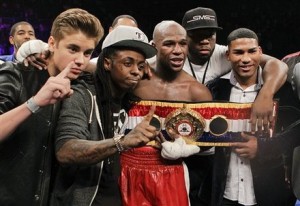 Once the fight with Miguel Cotto actually started, though, it became clear that an elite prizefighter was at the center of this motley crew of fair-weather friends and media misfits.

Mayweather, in the ring, is brilliance, professionalism, and class. Outside the ring, his image is the exact opposite. Oddly, this is the same person that, by personal accounts relayed to me since 1995, is also known to be polite, somewhat shy, and extremely gracious– almost to a fault.

It’s not unusual that a human being would have many facets to his character, so a Floyd Mayweather with many faces is not really a surprise. It’s not my job as a boxing scribe to pass judgment on the heart and soul of a human being. And I certainly don’t plan on going on any personal vendettas to crucify and discredit any fighter for being a jerk outside the ring. I’ll leave that to the soulless-types in fake fedoras who gladly exchange integrity and self-respect for meaningless traffic from Pacland.

Maybe I don’t care to pass judgment because of where I grew up. Mayweather is no different than a lot of the kids I grew up with. No father, no guidance, no real male role models. He had Uncle Roger and the boxing ring, which likely saved his life, but that was it. As Mayweather grew up, he began piecing together a makeshift crew of surrogate male role models. And now that he has money and the fast friends that come along with platinum suitcases stuffed with crisp, new Benjamins, he is the center of his own self-made universe.

Do I think that Mayweather is a racist, misogynist, professional scumbag? I don’t know and don’t really care to know, but if I had to guess, I would say that he is none of the above. He’s merely acting the way he’s expected to act, playing the role that his cadre of yes men want to see. But, again, I’m no psychologist, nor do I want to scale that slippery slope of pious moral outrage– especially in a prizefighting world full of some truly troubled, dark-souled human beings. Many writers, though, don’t mind crossing that line. I’m not one of them.

If you’re fucking up your job and/or ruining someone else’s honest livelihood, I’m all over that, but I’ll leave the character examinations to the noble garbage-picking bottom-feeders (whose own exemplary moral character  should, really, be investigated and featured prominently somewhere).

There is a double standard when it comes to Mayweather and a troubling tendency to let self-righteous, often erroneous, moral indignation spill over into the in-ring commentary and post fight analysis. This really doesn’t happen with anyone else. Even Tony Ayala Jr., one of vilest pieces of trash to ever step foot in a ring (Do a Google search if you’re not familiar with the louse), got a fair, professional call whenever he fought and was treated fairly during interviews.

Mayweather, since severing ties with Top Rank, has been engaged in a perpetual uphill battle to defend his professional legacy and in-ring mastery from being diminished by those with agendas– the Top Rank shills and the self-righteous creeps who see it as their duty to knock him down a few pegs. And Mayweather, not being the sharpest crayon in the box or the most skilled public relations person, never comes off well in self-defense mode.

Yeah, what Mayweather says is sometimes boorish, at best, and disgusting, at worst. But it’s only one guy talking and, ultimately, it has nothing to do with his job and the reason we even know or care who he is. As for his garish, Hip-Hip Beverly Hillbillies lifestyle, who cares? It’s entertainment.

At the end of the day, it always comes back to the one place where Floyd Mayweather is the safest and most secure– in the ring. And that’s fine by me.

You can email Paul at paulmagno@theboxingtribune.com or catch him as secretly pines away to gain membership into mostly-fictitious secret brotherhoods of crime fighting boxing scribes . Paul is a full member of the Burger King Kids’ Club, a born iconoclast, and an ordained minister in the Universal Life Church.