It was tournament boxing. It wasn’t the Golden Gloves or the Olympics, and it wasn’t today’s Prizefighter, though it was just the same. After a failed attempt by Don King to put together a mega-tournament between the world’s 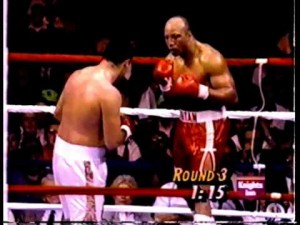 top heavyweight prizefighters had floundered, the plan went through, only in a different form.

What we ended up with was “The People’s Choice World Heavyweight Superfights”, a 16-man, one-night tournament of heavyweight boxing filled with past-their-prime names, up-and-comers, and complete rookies. It all went down at Casino Magic in Bay St. Louis, Mississippi, December 3rd, 1993…on pay per view, of course.

The moniker “People’s Choice” came from the fact that seven of the 16 fighters were fan chosen via 900 number. Of course, turmoil and last minute replacements are common in boxing and that was the case here too. For starters, Leonsio Bueno, at the time a 1-0 pro out of Dominican Republic had visa issues. Not knowing until the last minute that Bueno was a no show, Shane Sutcliff was yanked from the stands as a replacement. Sutcliff hadn’t trained a lick. Before losing his first bout of the night, Smokin’ Bert Cooper was served process papers (related to promotional issues) that were erroneously served to Bert Sugar first. Only in boxing.

Despite being bashed by the media (Wallace Matthews headlined “Sport of Boxing Committing Suicide with a Smile”), the night of three rounders wasn’t too bad and the show lasted a bit over four hours, airing the round of 16, quarter, semi and final bouts with a short intermission at the half way point.

Despite being referred to as a glorified toughman contest, it was anything but. Most of the bouts were enjoyable and those that weren’t…well, they were only three rounds long anyway. Sports Illustrated called it “Attack of the Killer Tomato Cans”, but I’m sure the guy who thought up that headline never had to face the possibility of fighting four heavyweights in one night.