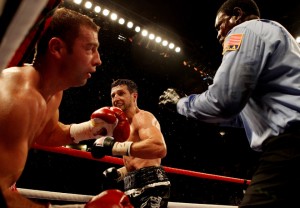 No, Lucian Bute was not “exposed” by Carl Froch on Saturday. He was beaten to a pulp by a supremely motivated world class fighter. Such things happen in the boxing world. Such things are supposed to happen when two top fighters face one another.

Sure, it was troubling to see one “elite” level fighter take so many flush right hands and not be able to adapt, but Bute’s inability to avoid Froch’s right hand bombs doesn’t immediately negate everything he ever accomplished.

It wasn’t like Bute had spent the last five years beating up the cast of Glee.

The Romanian/Canadian had faced and beaten some fairly solid fighters and, although not included in the Super Six party, had faced the “best of the rest” while waiting for the tournament fallout. All in all, Bute’s run as IBF super middleweight darling featured wins over Sakio Bika, Glen Johnson, Brian Magee, Jesse Brinkley, Edison Miranda, and Librado Andrade. (among others). That’s a pretty damn solid last, especially considering that Andre Ward, Carl Froch, and most of the rest of the Top 10 was busy being shuffled into and out of the Super Six. And except for his first bout with Andrade, Bute handled all of these peripheral Top 10 guys rather solidly.

Granted, a lot of solid, mid-level wins over fringe contenders isn’t the stuff of legends, but it also isn’t the calling card of a bum.

Maybe Bute was overrated and simply found himself against a better fighter. Again, these things happen when good fighters face other good fighters. At some point everyone reaches their high water mark as a professional.

The post-fight lynching of Bute’s image and complete negation of his marginal legacy is something unique to this day and age of fight fans. It’s a beast created by the public and by a media more focused on “Tweeting” the  minutiae of boxing chatter than actually understanding the sport they cover.  This is also  precisely why fighter management is so reluctant to put their guys against tough opposition until absolutely necessary. One loss and their fighter might as well be handing out flyers for escort services on the Vegas Strip.

So, enjoy the world you’ve created. A world where fighters face nobody of note, even after winning a “world” title.

Sometimes fighters lose and sometimes they even get blown out. It happens. It doesn’t negate everything they’ve done up until that point and, ideally, it shouldn’t forever mark him as some bumbling tomato can.

Maybe Bute never rebounds. And, if that’s the case, then his legacy will be  that of a solid  fighter who got blown out by Carl Froch. Not a scandalously bad legacy by any stretch of the imagination. And certainly not as bad as if he had opted to never fight anyone in the Top Five.

Give Carl Froch full credit for Saturday’s win. He beat a legitimate Top Two super middleweight and did so spectacularly. The End.

You can email Paul at paulmagno@theboxingtribune.com and feel free to make veiled, mentally-unbalanced references to him in your professional bio. Paul is a full member of the Burger King Kids’ Club, a born iconoclast, and an ordained minister in the Universal Life Church.