One-time great and current fallen star Kelly Pavlik (38-2, 33 KOs) looks to put his career and his life back on track on ESPN2 Friday Night Fights from Las Vegas this June 8th against designated patsy Scott Sigmon (22-3, 12 KOs). In the co-feature, rising junior featherweight Jesse Magdaleno (9-0, 6 KOs) gets another showcase fight with the role of fall guy being played by Carlos Valcarcel (12-4-4, 5 KOs). As a bonus treat for the fans, in a scheduled televised six-rounder, Mike Lee (8-0, 5 KOs) gets a five-dollar foot long boost to his budding career as a guy who tells us to eat Subway sandwiches against who-dat opponent Isaiah Barela (4-2, 3 KOs), who has lost his last two. 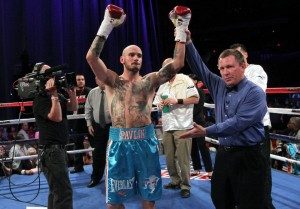 Kelly Pavlik went from undisputed middleweight champion to punchline in as much time as it took his “Drink Like A Champion Today” T-shirts to look less like a party hard and work harder ethos and more like a cry for help. Pavlik has punked out of contracted fights during fight week, he has gotten his ass handed to him by Bernard Hopkins and Sergio Martinez, and he has reached the point where Teddy Atlas, doing the video preview for ESPN’s boxing coverage online, flat-out said that his people think he needs some tune-up fights on television before he is ready to fight the big boys again. Pavlik, still only 30 years old, still has some fight left in his fists. The question is whether he has any fight left in his heart. The wild ride from champ to chump may have taken more out of Kelly Pavlik than can be restored even with Popeye’s spinach.

Standing across the ring from Pavlik is Scott Sigmon, a good-natured chap with plenty of work ethic and not much boxing ability. All of Sigmon’s wins have come against tomato cans, who-dats, and hobos, while all three of his losses have come when he has stepped in the ring with anyone who even has the faintest modicum of boxing ability. As big names on FNF go, this one has “Arreola vs. Abell” or “Holt vs. Diaz” written all over it, a fight contrived with the sole purpose of getting the Punch of the Night on SportsCenter. If Scott Sigmon knocks out Kelly Pavlik, your columnist will eat his hat.

Meanwhile, Jesse Magdaleno has perhaps a more intriguing road in front of him in the co-feature, not because he is in any real danger of losing (Carlos Valcarcel is a Double Bacon Palooka with Cheese), but because he is NO real danger of losing. Paradoxically, the less a fighter has to lose from his opponent, the more he has to lose in the court of public opinion, especially at a low weight like 122 pounds where most casual fight fans pay no attention. 122 is becoming a stacked division, with Guillermo Rigondeaux, Nonito Donaire, Rico Ramos, Abner Mares, and a cast of Japanese dudes all acting as road blocks. If Magdaleno is to make a case for himself as something other than an ESPN-grade prospect, he not only has to win, he has to win in spectacular fashion. Valcarcel has been dumped on his posterior by a good fighter before, getting stopped in six rounds by Eric Morel, but he has also stubbornly stuck around, given rounds, and survived the distance against prospects. Magdaleno needs to not only win, but win convincingly, if he is to be seriously considered as part of the 122-pound in crowd.

At the last, we have Mike Lee, or “that other guy besides Blake Griffin and Michael Phelps in those Subway ads.” Now, we love the fact that a mainstream company like Subway is willing to dip its toe into the rough-and-tumble world of professional boxing (and would like to direct any Subway guys responsible for their ad buys to the editor-in-chief because free footlongs would be awesome), but Lee’s bout being televised smacks of a back-scratcher deal since “Eat Fresh” is plastered all over other things ESPN-related. Live boxing is nice, but watching a guy fight a patsy for the benefit of an ad relationship smacks of preferential treatment. Of course, if Lee is the real deal, looks good on TV, and beats the snot out of the schmuck standing across the ring from him, all will be forgiven, because to paraphrase the Bible, “Violent, concussive knockouts cover a multitude of sins.” (1 Peter 4:8)

Friday Night Fights airs on ESPN2 and ESPN3.com from the Hard Rock Hotel and Casino in Las Vegas on June 8th at 10 PM Eastern/7 PM Pacific. The Boxing Tribune will have a full recap of the night’s televised action, including any additional fights that may make air if any or all of the scheduled televised bouts end early. Stay tuned—we’re the worldwide leader in covering the Worldwide Leader.

Fox Doucette covers Friday Night Fights for The Boxing Tribune. His weekly column, The Southpaw, appears on Thursdays. Fan mail, hate mail, and bets on Pavlik’s blood alcohol level the next time he gets pulled over can be sent to beatcap@gmail.com. (yeah, that was a low blow. Deal with it.)