The following is a press statement issued to the media from trainer, Emanuel Steward:

Lee to his credit went to the champion’s backyard with 20,000 Mexican cheering for Chavez Jr. at the Sun Bowl Stadium a long way from Limerick, Ireland. He prepared meticulously for the fight and did everything that was asked of him to promote the fight. He showed courage and heart and did his utmost and best in the fight. 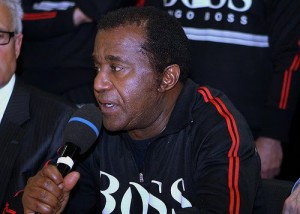 Lee was ahead of all 3 judges’ scorecards (58-54) at the end of the 6th round before the referee Laurence Cole intervened and stopped the fight 2.21 minutes into the 7th round after a sustained barrage of punches were inflicted on the Irishman by Chavez Jr.

In the aftermath of the fight Emanuel Steward has expressed he is very concerned about whether the fight was a level playing field for both fighters to compete in. Chavez Jr. neglected to give a mandatory urine sample when he successfully defended his title against Marco Antonio Rubio in Texas in February this year.

Team Lee have now requested confirmation and clarity from Dick Cole, the Texas State Athletic Commissioner on whether Chavez Jr. carried out an anti-doping drug test on Saturday evening and what the results are. Furthermore Emanuel Steward has a meeting with Senator John McCain, instigator of the Muhammad Ali Boxing Reform Act on July 10 and one of the items on the agenda is enhanced performance drugs being used in professional boxing.

Emanuel Steward commented ‘Andy Lee is like a son to me, I always look after all my fighters’ health and wellbeing. I am very concerned about enhanced performance drugs being used by boxers. This is not tennis or golf; boxing is a physical combat sport where if drugs are used by one fighter then this is a disadvantage against the other fighter and causes serious damage to a fighter’s health. Are we going to wait for someone to be killed in the ring before this matter is taken seriously and dealt with?”

“I am taking this matter about the fight on Saturday evening very seriously and I am waiting on the Texas Commission to clarify the situation before considering any appropraite action. I am not putting Andy Lee or any of my fighters’ lives at risk in life and death fights and then everyone pretends this is the honourable noble art of the sport of boxing. Good people in boxing need to stand up and speak out for what is right and stop these fighters, promoters and commissions doing whatever they like because they have money, power and muscle.”

According to White Sands, drugs and bad judging can kill the sport of boxing in the United States. The fans are turned off; they love the sport but not the business of boxing. What type of role models and heroes are professional boxers and world champions using drugs providing to young kids in the gym starting their amateur careers? Parents and Youth and Community workers are trying to steer their kids away from drugs.

Steward also expressed concerns about Chavez ballooning in fights from 160lb on the day of the weigh-in to 180lb come fight night and the weight advantage he then has against his opponents. Another issue was why Chavez Jr. was complaining about leg cramps after the fight.

Most observers thought the size of the ring was a joke, it was not a world championship ring, and it was more like a training ring for young amateur kids at the local recreation center. All of this weighted to Chavez Jr advantage.

Andy Lee took defeat on the chin, and like the true Irishman that he is he will pick up the pieces of his shattered dream and life will go on, tomorrow is another day. There’s an old saying ‘that victory isn’t defined by wins and losses; it’s defined by effort.’ Andy Lee performance was not short of effort.

As Theodore Roosevelt also once said ‘It is not the critic who counts: not the man who points out how the strong man stumbles or where the doer of deeds could have done better. The credit belongs to the man who is actually in the arena, whose face is marred by dust and sweat and blood, who strives valiantly, who errs and comes up short again and again, because there is no effort without error or shortcoming, but who knows the great enthusiasms, the great devotions, who spends himself for a worthy cause; who, at the best, knows, in the end, the triumph of high achievement, and who, at the worst, if he fails, at least he fails while daring greatly, so that his place shall never be with those cold and timid souls who knew neither victory nor defeat.”

Andy Lee was the fighter in the boxing arena, who has tasted and knows victory and defeat and on Saturday night he failed while daring greatly in trying to win a world title and realise his dream and you cannot ask for any more of a fighter.