2008 Olympian Deontay “The Bronze Bomber” Wilder (22-0, 22 KOs) will be pitted against former world title challenger, Owen Beck (29-10, 20 KOs) in a scheduled 8-round fight on Saturday night at the Killer Buzz Arena in his hometown of Tuscaloosa, Alabama. 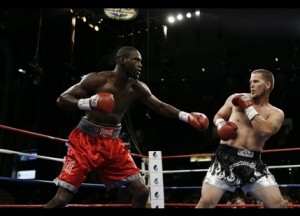 Wilder, the heavyweight Bronze Medalist at the 2008 Olympic Games in Beijing, is being brought along painfully slow in his career. He has knocked out every opponent he has faced thus far, and in his 22 professional fight he has boxed a total of only 36 rounds. His level of opposition has left much to be desired, however. Marlon Hayes (5’ 9”), who was knocked out in 4 rounds by Wilder in February, had lost 5 straight and 8 of 9 in the light heavyweight and cruiserweight divisions prior to stepping up to face the 6’7” Wilder in the heavyweight division. In his last fight which took place on May 26, Wilder needed only 26 seconds to dispatch of Jessie Oltmans (10-2)

His opponent for Saturday, Owen Beck, has lost 7 straight coming in. Beck challenged for the WBA heavyweight strap in 2006, but was knocked out in 3 rounds by Russian giant, Nikolay Valuev. Following the loss to Valuev, Beck won 4 straight against club-level opposition, but has not won since an 8-round decision over Jermell Barnes (18-21, at the time) in 2009.