Friendly Fire is a semi-regular feature on The Boxing Tribune where the fans have a chance to sound off. If you’d like to contribute a Friendly Fire article, contact Paul Magno (paulmagno@theboxingtribune.com) or any of the other Boxing Tribune staff writers 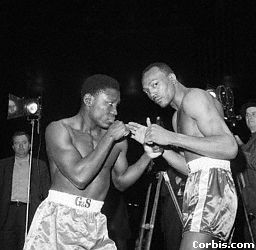 We are going to focus on four boxers who can easily be called a “Rodney Dangerfield”.  The boxer must be someone that can falls within these categories:

Bob Foster: Light Heavyweight is one the original boxing divisions.  At one point, it represented the step before going to Heavyweight.  The division currently represents good size guys who are athletic, powerful, quick, and/or strong.  Well, Bob Foster had all of that!  When I first saw his highlights I was amazed by his superior talents!  He could do anything and everything within a boxing ring.  Foster climbed up the ladder the “hard way” to success, losing four fights before getting the first title shot.  It came in April 1970, when he knocked out Roger Rouse in four rounds.  After a successful defense that included a knockout, Foster tried his hand at heavyweight.  Instead of taking “tune-up” fights to get comfortable with the weight, he went after the Great Joe Frazier but lost by KO in round two.  Foster went back to light heavyweight and won his title back by TKO.  Defending the titles six times, he took another chance at heavyweight and faced perhaps the greatest fighter of all time in Muhammad Ali.  Again, Foster could not come over and lost by KO in round eight.  Foster would then come back down to defend his light heavyweight belts three times.  He is certainly one of the greatest fighters in his division, era, and all-time!

Mark Johnson: The very first time I took notice of the small men in the sweet science, Mark Johnson was in the ring.  He was flashy, raw, powerful, and skilled.  Johnson was a two-division world champion.  I was able to see him for the first time against Fernando Montiel.  It was certainly a very good fight to watch.  Johnson had fought the current who’s who of the little men.  Battles with Montiel, Rafael Marquez twice, Jhonny Gonzalez, and Ratanachai Sor Vorapin confirm his resume.  Recently, Johnson was elected to the hall of fame and it was surely earned and respected.

Alexis Arguello: We must do our part in supporting the sport from a global perspective.  Fighters come from all over the world. Nicaragua produces high quality fighters and world champions.  This man proudly did his part in keeping that tradition upheld.  A former 3x World Champion in three different weight classes was able hold his own in the ring.  After losing his first title shot, he came back and won his second time around by KO in the thirteenth round.  Arguello defended his title four times before going up in weight to win another belt by TKO.  Defending his crown eight times within a two year span, Arguello again went up in weight to win his third world title.  His battles with Aaron Pryor, Sr. are classics!  Unfortunately, we lost him tragically, but his battles and talents will live on forever in the boxing world.

Sven Ottke: Keeping it global, Europe is a continent that creates much-deserved boxing buzz for its talented fighters.  There are quite a few boxers who have retired undefeated.  Most people know about Rocky Marciano because of the past and recently retired Joe Calzaghe, but people in America do not mention Sven Ottke.  Mainly because he has never fought on US soil nor has he been on American TV, but the name has relevance.  Some suggest he was Calzaghe before Calzaghe.  Winning a super middleweight title and defending it strictly in Europe for many years was his thing.    The facts are that he never lost and did manage to unify the titles.  He has beaten former world champions in Robin Reid, Anthony Mundine, Bryon Mitchell, and Glen Johnson.  Some feel Johnson should’ve gotten the the nod, but lost due to German homecooking.  Some may argue that he never fought Jones Jr., Calzaghe, Toney, or Hopkins.   One thing that you cannot argue is Germany certainly has a boxer who’s a national treasure and can be considered one of the best ever.

There you have it!  Another selection for the Rodney Dangerfields of Boxing for you hungry learners and readers!    Until next time, keep enjoying and loving the sport of boxing!