Nonito Donaire (28-1, 18 KOs) is a unique talent in boxing. As we’ve been told for ages, the “Filipino Flash” is among the very best in the sport today. Blessed with supreme hand speed and reflexes, Donaire shows occasional flashes of true brilliance

And when I say “occasional,” I mean that in the literal sense. 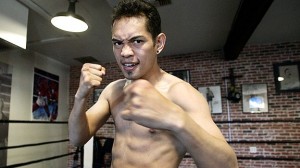 More often than not, we only get to see the brilliant Fil-Am star in size/age/class mismatches that feature one-sided beatings by a frequently disinterested Donaire. It’s not that his opponents are that bad– certainly, there are plenty of main stage fighters regularly punching well below their weight. But for a fighter that has been promoted as a pound-for-pound superstar for the last five years, Donaire’s resume is shockingly thin.

From the moment he knocked the Armenian crab-man, Vic Darchinyan, silly in 2007 to his near decapitation of Fernando Montiel in 2011, Donaire fought seven times, mostly against pedestrian opposition brought up from lower weight classes to fight a guy who will be naturally bigger than everyone he faces up to 130 lbs.

Since taking the WBO and WBC bantamweight titles from Montiel, Donaire defended the belts once against gun shy super flyweight champ, Omar Narvaez and then moved up to take the vacant WBO junior featherweight title in a respectable performance against Wilfredo Vazquez Jr.

Again, not a horrible pair of post-Montiel fights, but hardly match-ups suitable for a once-in-a-generation, unique talent and “heir apparent” to Manny Pacquiao. Especially frustrating is the fact that, while Donaire is fighting two divisions below his natural weight against fighters often fighting two divisions above theirs, there are plenty of quality, legacy-defining bouts to be made for him.

From 118-122 pounds, the landscape is chock full of legitimate challenges for Donaire. Abner Mares, Guillermo Rigondeaux, and Anselmo Moreno are just a few that come to mind.

In a perfect world, WBA junior featherweight champ and Cuban amateur superstar, Rigondeaux would be on the fast track for a Donaire showdown as a Top Rank stablemate and a fellow world titlist. But given that Top Rank is the company that stubbornly refused to put together a Juan Manuel Lopez-Yuriorkia Gamboa bout when it made the most sense, it’s much more likely that Donaire and Rigondeaux will be kept far apart while the public is aggressively teased with the prospect of a mega-bout between the two.

If there’s a Manny Pacquiao-type buck to be made by Bob Arum and company, rest assured that Donaire won’t be fighting anyone with a chance of beating him until…well, until forever or until there’s no money to be made in bludgeoning midgets, fringe contenders and paper champions.

This Saturday’s bout with IBF 122 lb. titlist, Jeffrey Mathebula (26-3-2, 14 KOs) fits the bill of what we can expect from Donaire’s opposition in the Top Rank cocoon. The South African is solid, but not spectacular and, despite the world title he will bring into the ring, fairly untested at the elite level.

In his only three international fights of note, he’s 1-2 with a loss to Celestino Caballero and a 1-1 split against former IBF titlist, Takalani Ndlovu. Other than the shiny IBF strap he’ll hand over to Donaire, Mathebula’s only real selling point appears to be the fact that he’s almost five inches taller than Donaire.

So, given his bleak chances for an upset, it’s no surprise that none of the buzz surrounding this fight is actually focused on Mathebula.

Instead, the pre-fight headlines have come from name-dropping possible Donaire opponents and from Donaire’s agreement to be the first fighter to undergo year-round PEDs testing.

The testing, which will not be in effect for the Mathebula bout, will be done by the Voluntary Anti-Doping Agency (VADA), the upstart agency recently in the news for detecting PEDs use in Lamont Peterson and Andre Berto. It should also be noted that Victor Conte, of BALCO infamy, serves as Donaire’s nutritionist and, simultaneously, works with VADA as an independent adviser. So, take the testing bravado with the appropriately sized grain of salt.

PEDs testing or not, Donaire is expected to run right through Mathebula and add the IBF title to a growing list of trinkets and stellar headlines for his personal scrapbook.

But broken down and laid out flat for the world to see, Nonito Donaire’s career has thus far been a disappointment. A run-of-the-mill pug would be happy with Donaire’s resume. But a 29-year-old legend-in-the-making should be chin-deep in legacy-defining fights by this stage of his career. After five years and eleven bouts as a main stage player, Donaire only has the Darchinyan and Montiel wins, spaced four years apart, as proof of his elite status.

In some ways, the criticisms leveled at Donaire are actually high compliments.

Fans want to see him truly tested, pushed to his limits and forced into a war where his raw talent isn’t the only deciding factor.

Nonito Donaire has an air of greatness about him. The fans just want to see him actually become great.