Veteran of more battles than a Star Trek captain Glen “The Road Warrior” Johnson (51-16-2, 39 KOs) takes on Polish fringe prospect Andrzej Fonfara (21-2, 12 KOs) in the main event of ESPN2 Friday Night Fights from Chicago; Johnson has said that if defeated he will retire (and considering his level of opposition, he probably should retire if defeated.) In the co-feature, another once-great fighter sees TV airtime as former world champion Jose Luis Castillo, participant in what may have been the greatest fight the lightweight division has ever seen (against Diego Corrales in 2005), takes on palooka in the making Ivan Popoca (15-1-1, 10 KOs). 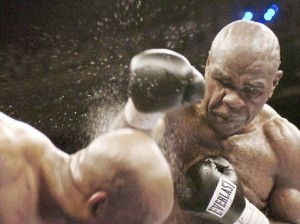 Glen Johnson has been in the wars. At some point, “fought the better level of opposition” becomes less about the predictive power of that phrase on a single fight and more about a fighter’s entire body of work when considering his legacy. For Johnson, he has fought the entire who’s who between super middleweight and light heavyweight. Lucian Bute, Carl Froch, Tavoris Cloud, Chad Dawson, Roy Jones, Antonio Tarver…mind you, Glen Johnson lost to most of those guys (his one signature win being the fight in 2004 in which we began to realize that Roy Jones Jr. had become an old fighter overnight), but that has been the story of Glen Johnson’s career, always just good enough to lose to an elite fighter.

Andrzej Fonfara is not an elite fighter. On paper this should be a complete mismatch, with Johnson set to punch through the Pole like tissue paper en route to an easy knockout win. Fonfara has on his record a loss to Derrick Findley, by second round knockout, and that is probably a fair assessment of Andrzej Fonfara’s ceiling.

What complicates matters here is that Glen Johnson has said he will retire if he cannot get past a Polish fringe guy. How the mighty have fallen, truly, since this is, as previously mentioned, the kind of guy Johnson should slaughter. Frankly, if this fight goes the distance, no matter who wins, Glen Johnson should retire. ESPN has put him in against a guy who is miles beneath him. This may turn out to be the saddest of swan songs should he do anything short of win impressively.

Meanwhile, the co-feature participants should be familiar to fans, albeit for opposite reasons. Regular followers of Ruslan Provodnikov’s rise on FNF should know who Ivan Popoca is; last April the Russian made Popoca look like what he is; a Chicago club fighter who will become a gatekeeper before he ever becomes a world champion. Provodnikov stopped Popoca in eight rounds, and Popoca has not fought since. However, with a fight in his hometown, perhaps his handlers felt that grabbing a paycheck would be in order without having to leave the friendly confines.

Jose Luis Castillo and Glen Johnson have a lot in common. Both men have been in the wars, fought everyone there is to fight at their respective weight classes, and largely come up second best in those fights. Castillo is unforgettable, his legacy secure, as he was one momentary lapse in defense away from knocking out Diego Corrales in the tenth round of their first fight (before Corrales showed the heart of a lion in coming off the floor of what was shaping up to be a 10-6 round in order to win.) When Castillo got another shot at Corrales, he completely slaughtered him by fourth-round blowout KO that showed how much the first fight took out of Diego Corrales (Corrales would never win again in his career, which was cut short by Diego’s death in 2007.)

Since those two wars, Jose Luis Castillo has a slew of wins over modestly skilled fighters (his most distinctive victory came in handing Herman Ngoudjo his first pro loss) to go with losses to Ricky Hatton, Sebastian Lujan, Alfonso Gomez, and Jorge Paez Jr. Castillo is a shadow of the fighter he once was, his career as a world champion a distant memory for YouTube and barroom arguments.

That said, he puts on a good scrap, fearlessly placing a left hook that frequently hurts opponents. Popoca has already been knocked out by a power puncher on ESPN2; this week’s show has all the makings of another showcase fight, putting a big name on TV without making a competitive fight. Don’t expect a miracle from a club fighter who is nowhere near as good as his record. He is a sacrificial lamb.

Friday Night Fights airs July 13th on ESPN2 and ESPN3.com, at 10 PM Eastern/7 PM Pacific. The Boxing Tribune will have a full recap of the night’s televised action, including any swing fights that make air (and there will be swing fights, almost certainly), following the conclusion of the broadcast. Stay tuned—we’re the worldwide leader in covering the Worldwide Leader.

Fox Doucette covers Friday Night Fights for The Boxing Tribune. His weekly column, The Southpaw, appears on Thursdays. Fan mail, hate mail, and thoughts on the comparative merits of Corrales-Castillo I and Ward-Gatti I as greatest scrap of the decade can be sent to beatcap@gmail.com.