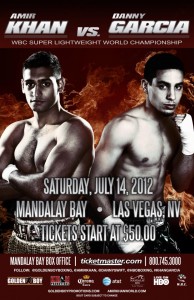 While Danny Garcia comes into the fight on the heels of the two biggest wins of his career, Amir Khan, 25, stumbles into this fight. Last December he lost a controversial split decision, as well as his WBA and IBF titles, to Lamont Peterson in the nation’s capital. Two point deductions and allegations of improper scorecard handling and tampering left the outcome of the fight clouded in controversy. After the IBF’s investigation led to a mandatory immediate rematch, Lamont Peterson tested positive for artificial testosterone one week before the May 19 rematch was to take place. The fight with Garcia was signed a few days later. The WBA elected to strip Lamont Peterson and reinstate Amir Khan as its jr. welterweight champion on Wednesday.

Garcia, 24,  is making the first defense of the WBC title he won in his March 24 fight with Erik Morales. Garcia started slowly before stepping on the gas and taking control of his older and slower opponent to claim the WBC title made vacant when Morales could not make the 140-pound weight limit. Prior to beating Morales, Garcia won an impressive 12-round decision victory over former WBO jr. welterweight titlist, Kendal Holt.

This is the type of fight that will draw the ire of some in the media while at the same time drawing praise for the willingness of Golden Boy to pit two of its young stars – both world title holders – against one another.

While Garcia is less than two years younger than Khan, he is at a significant experience disadvantage. Garcia graduated quickly from prospect to contender, and from contender to world champion. Garcia logged wins over Ashley Theophane and Mike Arnaoutis in 2010, and he outpointed former world champions Nate Campbell and Kendall Holt in 2011.

Khan was groomed and brought along to world champion level early in his career. An early knockout loss to Breidis Prescott in 2008 stalled his progress and put him on a path against a long line of light-hitting opponents ranging from a faded and overweight Marco Antonio Barrera, Dmitriy Salita, and Paulie Malignaggi. In between it all, Khan outboxed Andriy Kotelnik to win the WBA jr. welterweight title a year after suffering his first loss.

Khan will have the clear advantage in hand and foot speed against the slower, plodding Danny Garcia. He’ll need to use his speed to score points and keep Garcia at bay, where Khan will better be able to avoid Garcia’s wide, looping punches. If Garcia is able to cut off the ring and get into a more comfortable range, he’ll be able to take advantage of Khan’s glaring inability to fight on the inside. Khan has also shown a weakness against relentless punchers who keep on coming, as shown in his fights with Marcos Maidana and Lamont Peterson. When presented with an opponent in his chest, Khan will often resort to excessive holding. Garcia has shown in the past that he will continue to work against his physical disadvantages to will himself to victory.

It all comes down to ability and ring smarts versus heart and determination. Khan has to be smart and use his speed to stay away from a Garcia who hasn’t shown a great knack for cutting off the ring, but will trudge forward relentlessly as he tries to get to Khan’s suspect chin.

The winner walks away with two of the four major jr. welterweight titles and a claim to the top spot in the jr. welterweight division. The loser goes back a few steps in a division that has lost some of its talent to the welterweight division. As stated before, Danny Garcia is at a disadvantage in the most important areas of the sport, but Khan has been mired in the controversy surrounding his December 2011 loss to Lamont Peterson and the positive drug test that scuttled their proposed May rematch. Expect Khan to dazzle in the early rounds before prolonged punishment slows him down, allowing Garcia to take over in the second half of the fight and take a split decision victory.