Colombian lightweight prospect Darley Perez (25-0, 19 KOs) looks to make his case for inclusion in the 135-pound contender discussion as he takes on Uzbekistan’s Bahodir Mamadjonov (11-0, 7 KOs) in the main event of ESPN2 Friday Night Fights from Cabazon, California. In the co-feature, hard-hitting junior featherweight Yenifel Vicente (23-0-2, 15 KOs) steps out of the tomato can aisle to take on Chris Avalos (19-2, 15 KOs). The night has something of a United Nations feel, as fans get to see a Colombian, an Uzbek, a fighter from the Dominican Republic, and an American, creating a professional international flavor to rival the amateur melting pot currently underway in London. 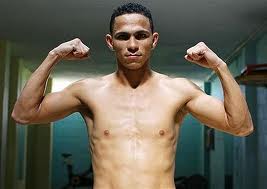 Darley Perez is still at a point in his career where the jury is out on just what he brings to the table. Considering the quality of his opponents thus far, he could be a Hank Lundy/John Molina/Ray Beltran-caliber fighter. He could also be more like a Breidis Prescott, his countryman, who built a record in his homeland, shocked the world against Amir Khan, then has completely failed to capitalize on that win, looking ordinary in his fights since. The combined record of Perez’s last five opponents is 117-63-15 (counting records at the time of the fight), with the bulk of those losses coming by knockout. Whatever the skill level of Perez’s opponent Friday night, it is likely to be a quantum leap in quality compared to what he is used to.

Mamadjonov, for his part, hasn’t exactly been in against Brandon Rios and Juan Manuel Marquez. He is coming off a win over a guy (Terrance Roy) who took a 9-35 record into the fight and suffered his twenty-sixth (!) knockout loss against the Uzbek. For Mamadjonov, every question raised about Perez in the previous paragraph applies doubly to him. This is a very intriguing matchup precisely because there is very little in the prior opponents to provide value to someone trying to tip the fights. This will be two undefeated fighters with everything to prove as each man takes on a guy who is in the same position career-wise as he is.

Meanwhile, Yenifel Vicente joins the parade of guys stepping up; with the exception of his last fight, which was in Nicaragua, all of his fights so far have been in the Dominican Republic. It is possible to find quality competition in the eastern portion of Hispaniola if one is a shortstop; as a boxer the level of opposition leaves something to be desired. Making his US debut, Vicente will have to show whether those fifteen knockout victories in twenty-five fights were a result of him being as hard-hitting as he is billed or whether the opponents had more to do with his record. Moreover, Vicente had two draws in his days on the hobo circuit, one in a four-rounder, the other in a six, in his second and third fights as a pro. Bernard Hopkins famously lost his pro debut, so those draws may not mean much, but Vicente has a looming question mark.

Chris Avalos, for his part, has fought quality competition and generally made a good but not great account of himself. Against undefeated fighters with at least ten pro fights, Avalos lost to 19-0 Jhonatan Romero and 18-0-2 Chris Martin (the same Chris Martin who has been on FNF twice this year), and he owns a win against 11-0 Khabir Suleymanov. Both of his pro losses were by split decision, although the scores in the Martin fight (98-94, 92-98, 93-97) and the fact that fight was in Minnesota suggest that Martin beat Avalos cleanly and the fight looked closer than it was thanks to Minnesota’s legendary judging incompetence (that state having sent Teddy Atlas apoplectic on more than one occasion in the past.)

Even though Yenifel Vicente is the undefeated fighter, he may not pose as much of a threat to Chris Avalos as the Californian’s previous undefeated opponents; this fight has “upset” written all over it. Look for Vicente to struggle as he adjusts to American soil with a quality opponent for the first time in his career. The eight-round co-feature may very well steal the show Friday night.

Friday Night Fights airs on ESPN2 and ESPN3.com on August 10th at 10 PM Eastern/7 PM Pacific. The Boxing Tribune will have a full recap of the night’s action, including any swing fights that make air, following the conclusion of the broadcast. Stay tuned—we’re the worldwide leader in covering the Worldwide Leader.

Fox Doucette covers Friday Night Fights for The Boxing Tribune. His weekly column, The Southpaw, appears on Thursdays. Fan mail, hate mail, and appeals to overturn his scorecards from past FNF nights Olympic-style can be sent to beatcap@gmail.com. All email submissions become the property of the Boxing Tribune and we retain the right to publish correspondence received.