The rumors have been circulating for months, but now everything is official– Former lineal junior welterweight champ and darling of Manchester, Ricky Hatton (45-2, 32 KOs), will return to the ring on November 24 at the Manchester Arena. 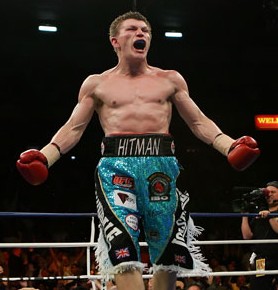 Hatton, apparently retired by a vicious second round knockout at the hands of Manny Pacquiao in May of 2009, will be looking to shake off about 3 and a half years of ring rust with a soft touch in November, but eventually has his eye on meaningful bouts and one more bid at a world title.

The popular UK star had a run of about four years as the consensus top 140-pounder in the world, despite only holding a recognized junior welterweight world title in three of his forty-seven bouts. But , prior to beating Kostya Tszyu in 2005 to win the IBF strap, Hatton had a long and successful career, representing the fringe WBU and scoring victories over the likes of Vince Phillips, Ben Tackie, Michael Stewart, and Ray Oliveira. As IBF titlist, he defended his title twice, scoring wins over Carlos Maussa and Juan Urango.

In between the Maussa and Urango victories, Hatton fought and barely beat Luis Collazo for the WBA welterweight title.

Hatton’s undoing came when he made his move to become a full-time international star. Although arguably past his prime and suffering the effects of years of yo-yo weight loss and the party lifestyle, he would be stopped by Floyd Mayweather in a 2007 welterweight contest and look flat six months later in a return bout victory over Juan Lazcano, back at home and back at the junior welterweight limit.

After an impressive eleventh round TKO of Paulie Malignaggi in November of 2008, Hatton would be stopped by Pacquiao in a chilling Knockout of the Year blast.

During a press conference in Manchester earlier today, Hatton denied that his return is motivated by money.

“I didn’t want my career to end that way,” Hatton said, referring to Pacquiao knockout. “It put me into retirement, which I never wanted to do. The manner of that defeat put me into some things which have been well documented…my life turned to mush.

“I got back into promoting which I loved – but it didn’t quite fill the void. I got a huge buzz getting opportunities for my fighters and I was in the gym every day of the week passing on the knowledge – but it didn’t fill the gap.”

Hatton will be 34-years-old when he enters the ring on November 24.