I didn’t have to see HBO’s 24/7 to know that Julio Cesar Chavez Jr. was a petulant man-child and I sure as hell didn’t buy the fake narratives peddled to the naive, jock-sniffing media members by Team Chavez prior to the big fight.

On Saturday, at the Thomas & Mack Center in Las Vegas, we saw the real Chavez Jr. We saw the product of a fighter who hadn’t learned some of the most essential lessens in facing someone like Sergio Martinez– not for lack of effort on the part of Freddie Roach, but for lack of desire on his part. Any way you cut it, he simply didn’t care to put in the hard work. 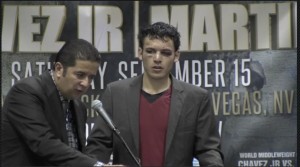 And why should he? The kid became world middleweight champion without ever fighting a top middleweight. He was genetically engineered into elite status in a division where he didn’t belong and immediately stepped up to the front of the line. The narrative of his life has taught him that his name, alone, is enough to open doors and get him whatever he wants. So, could anyone really expect the 26-year-old to suddenly become a professional and take things seriously?

Between rounds nine and ten, the Chavez corner was in chaos and trying to stress the urgency of the situation to their sleep-walking fighter, who wasn’t even attempting to win rounds. Roach was begging him to show something, his dad was yelling instructions from ringside. But Jr. had heard enough and issued a terse “Ya, ya, ya” to his people. It was the equivalent of a spoiled kid stomping his feet at being told to put away the X-box.

From the opening bell until his big left hand half-way through the twelfth, Chavez was docile and dumb, immediately giving way to the stronger-willed, smarter fighter and never doing much to prove himself. Even down eleven rounds to zero, Chavez Jr. was still fighting with a sense of entitlement– like it wasn’t even registering that he could lose. One got the feeling that, deep down inside, he was still expecting to have the win dumped into his lap.

Jr. almost got what he wanted in the very last round of the bout, when he connected with a hard straight right hand and then, a few seconds later, landed a sharp left hook against a spent Martinez.

For all the revisionist history about to take place on both sides of the Jr. argument, the fact remains that the kid is a lazy, pampered, dumb fighter who, if he can somehow still keep himself at middleweight, likely beats every 160-pounder in the world not named Sergio Martinez. As long as Jr. can make the middleweight limit and re-hydrate to cruiserweight, he will plow through the competition because, despite his glaring flaws, he’s still got a good chin, heavy hands, and the arrogant entitlement of a kid with more suits on his side than Mitt Romney.

But I come not to bury Cesar, I come to praise Sergio Martinez.

Martinez fought a brilliant fight for eleven and one half rounds before getting caught with a big shot from a walking wall of a human being, likely three weight classes larger than him by fight time.

Because Chavez refused to step on HBO’s unofficial pre-fight scale, we’ll never know just how much heavier he was than Martinez, but the difference was visually obvious and it became blatant from the fact that the few punches he landed flush caused the skin around Martinez’s eyes to rip open.

Martinez had a lot to deal with on Saturday. Frankly, I doubted that he had the strength of character to walk against the current of boxing politics while dealing with the dumb toughness of a gigantic man-child. Later, to make things more impressive, we would discover that Martinez had broken his left hand at some point in the fight and had also suffered through torn ligaments in his right knee. There were many ways for him to lose against Chavez, but only one long, rough, and exhausting road to victory.

The fighter mocked by many media shills and labeled “Zoolander,” in reference to the Ben Stiller movie about a vacuous male model, showed himself to be every bit the “real” fighter. He boxed brilliantly for 99% of the fight and when he did get hurt, he handled himself with the guts befitting someone on the short list of elite active fighters.

There’s already talk of a rematch, with Bob Arum discussing the possibility of a bout at Dallas Cowboys Stadium. From a business standpoint, this makes plenty of sense. PPV sales will be brisk and, given the massive Mexican and Mexican-American population in the area, one could reasonably expect an attendance of between 60-70 thousand.

Competitively, though, a rematch really isn’t necessary. Except for a stretch of about 50 seconds, Chavez Jr. was well over-matched and, even when landing his big shots in the twelfth, he looked painfully average in trying to close the show. This was more Mayweather-Mosley than Julio Sr.-Meldrick Taylor.

At the end of the day, as I wrote in my fight recap, there’s a reason champions are made in the ring and not in a board room or media center.