A lot is made of common opponents in sports where teams or individuals face the same teams or players. In college football, it’s part of the labyrinthine rankings system that’s barely better than what the Ring Magazine (or the new Sweet Transvestites From Transsexual Transylvania panel) rankings come up with for boxing. Sometimes a fighter’s not much by the light of day, but at night he’s one hell of a lover…after a guy he fought to a boring decision knocks out another dude. 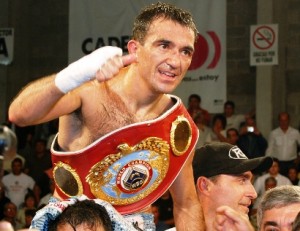 Enter Omar Narvaez. Last year against Nonito Donaire, he put on the anti-Ward-Gatti performance, as boring a fight as Micky and Arturo were entertaining, the yin to a yang and south to magnetic north. For twelve rounds, he managed to bore even his own opponent, and the end result was a wide unanimous decision and the bantamweight title for the Filipino who had to beat on an armadillo shell for 36 minutes.

Last week, Toshiaki Nishioka stepped in with the Filipino Flash and quickly started doing his best Omar Narvaez impression. Scared to death of getting starched like Fernando Montiel, Nishioka turtled up, uglied up the fight, and still couldn’t stop Donaire from stopping him in nine rounds. Indeed, Nishioka hit the ground twice. Does this mean that Omar Narvaez is a better fighter than is Nishioka, and does it further mean that Narvaez gets extra credit since Donaire’s power at 122 pounds has thus far in his career been extremely suspect?

It could just mean that there’s a right way and a wrong way to go into survival mode. Just because Omar Narvaez could ugly up a fight and get away with it for 36 minutes does not make him able to beat Toshiaki Nishioka, even if they were to fight at a catchweight of, say, 119 in order to close the gap between the natural junior bantam Narvaez and the natural junior feather Nishioka. Nishioka, when fighting guys not named Nonito Donaire, has shown excellent finishing ability and the ability to claw back after a knockdown, which has been a problem for his questionable chin. Narvaez would have a helluva time getting rid of him.

Consider also the record of everyone’s favorite Montreal whipping boy, David Lemieux. He has 27 wins, 26 by knockout, all against schmucks, nobodies, and tomato cans. Is Jason Naugler some kind of boxing superman because he uglied up his fight with Lemieux to last ten rounds and not get his ass handed to him by the same fate that befell Hector Camacho Jr. and Elvin Ayala (Lemieux’s two best wins, both vicious first-round stoppages)? Of course not. Camachito and Ayala would both mop the floor with Jason Naugler, whose 18-16-2 record, including a draw in his last fight against 7-21-4 Martin Desjardins and a KO loss to Fernando Guerrero (last seen getting beaten like a piñata against Grady Brewer on FNF last year), and his 0-9-1 record in his last ten fights (against guys like Don George and Jesus Gonzales in addition to Lemieux and Guerrero) shows what he is; a gatekeeper.

If indeed we go by “so-and-so beat so-and-so, so he must be great”, then what of Chuck Wepner (who put Ali on his ass in the ninth round of their fight and nearly lasted the 15-round distance) or Ken Norton (who famously gave Ali fits in all three of their fights, winning one and making a hell of an argument for the other two as well)? Would Chuck Wepner be able to beat George Foreman (whom Ali starched in eight in the Rumble in the Jungle)? Not if history is any judge—in Foreman’s fourth fight as a pro, he knocked out the then 18-4-2 Wepner in three rounds.

What’s the underlying moral of the story here? Well, besides “styles make fights”, which is why a guy as eminently mediocre as a “world-class” heavyweight like Ken Norton nearly went 3-0 against the Greatest of All Time (Norton’s argument for the sweep is at least as strong as Juan Manuel Marquez’s same argument against Manny Pacquiao, an argument that many who don’t have a penny-click stake in the boxing media have been known to make). Norton’s defense drove Ali nuts.

Micky Ward beat Arturo Gatti once in their three fights; nearly knocked him out in the ninth round of their first battle (and let’s not discount Frank Cappuccino’s legendary ref incompetence in making that possible; any decent ref would probably have heeded Jim Lampley’s directive to “stop it any time”—even Steve Smoger wouldn’t have let that fight continue, and he’s a blood-and-guts guy). Think on this. Micky Ward beat Arturo Gatti, who knocked out Terron Millett, who starched Vince Phillips, who…beat the snot out of Micky Ward en route to a third-round stoppage on cuts. If this sounds familiar, it’s because you’re a regular reader here; it’s “Six Degrees of Mike Tyson” (Southpaw #44, April 19) revisited with an eye toward who won each fight.

Getting back to that moral of the story: It’s that anything can happen on any given night, and how one guy did against another guy’s opponent doesn’t necessarily have jack to do with how he’s going to do against another guy. Still, Omar Narvaez did what Toshiaki Nishioka couldn’t, and both men were using the same style. That’s gotta repair his reputation at least a little after that stinker of a fight he seared into our collective brain last year.

Fox Doucette covers Friday Night Fights for The Boxing Tribune. His weekly column, The Southpaw, appears on Thursdays. Fan mail, hate mail, and more who-beat-who-but-not-who can be sent to beatcap@gmail.com.